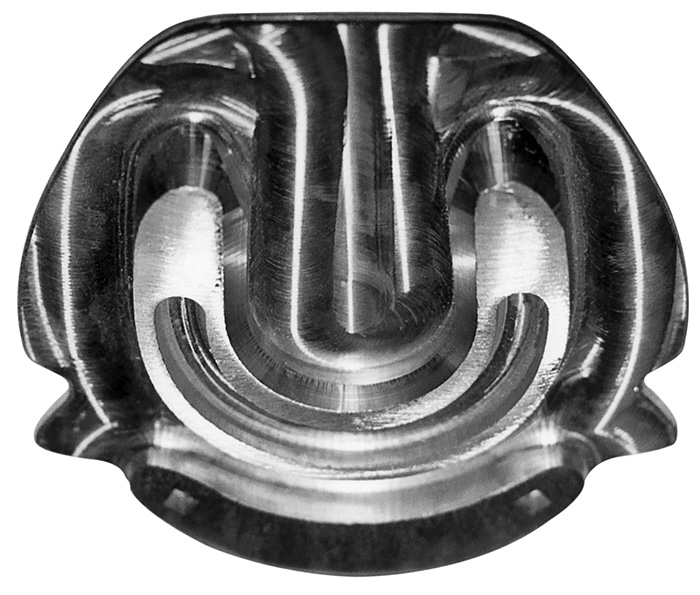 Use A Full-Rolling-Motion Shoe To Help Breakover

By Frank Lessiter posted on December 1, 2003 | Posted in Shoeing

NOVEL DESIGN. This shoe is part of a family of full-rolling-motion shoes that brings dorsal breakover back closer to the center of the foot and reduces latent medial breakover.

One of the more intriguing innovations at last January’s Bluegrass Laminitis Symposium was a full-rolling-motion aluminum shoe from Italy that was introduced by equine veterinarian Hans Castelijns.

While referred to as a rock ‘n’ roll shoe in Italy, the Cortona, Italy, vet says it’s not to be confused with the shoes that Versailles, Ky., veterinarian Ric Redden markets under the same name.

“This particular shoe is part of a family of full-rolling-motion shoes that not only brings dorsal breakover back closer to the center of the foot, but can also reduce latent medial breakover,” says Castelijns. “Their therapeutic use is mainly for articular pathology in the equine digit such as ringbone along with articular and ligamentary forms of navicular syndrome.”

He says the shoes make it much easier for horses suffering from painful laminitis to make difficult turns. The shoes can be screwed onto a glue-on cuff such as the Dalric or nailed on with a frog support cushion material by means of flat-headed PG nails. These shoes can also be used in conjunction with a hospital plate and have proven popular with performance, reining and Standardbred trotters in Europe.

Castelijns says the official name is the BVD shoe and is taken from basculament multi direzionale, which is Italian for multi-directional breakover. The shoes are computer milled out of…

How do you use your tactile senses to help trim and/or shoe a horse?

For More Comfort, Use a T Shoe