The Best Of Two Founder Fighters

By Pat Tearney posted on May 1, 2002 | Posted in Therapeutic Shoeing

Bernard Pelletier knows there are no silver bullet cures when it comes to laminitis — not even the four-point, heart bar shoe combination he’s enjoyed considerable success with.

“With some horses, this can take five to 15 shoeings,” he told attendees at the Bluegrass Laminitis Symposium in Louisville, Ky., in January.

With that in mind, the American Farrier’s Association (AFA) Certified Farrier from Horseshoe, N.C., takes a systematic approach to shoeing his high scale horses.

The first thing needed is an accurate diagnosis, says Pelletier. That means accurate X-rays and a proper lameness exam. It also means spending time talking with the attending veterinarian, any other farriers that may be involved, trainers and horse owners before you get started.

Pelletier says it’s important to let the owner know what kind of time frame the treatment will take, as well as what it will cost.

“You need to know that the owner can afford the laminitis work before you get started,” he says. “My philosophy is to charge as much as I can and do as much for the horse as I can. I don’t undercharge.”

But once that’s all taken care of, Pelletier believes the shoe he’s developed can be a powerful tool — one that combines attributes of two other shoes that have proven track records against laminitis. 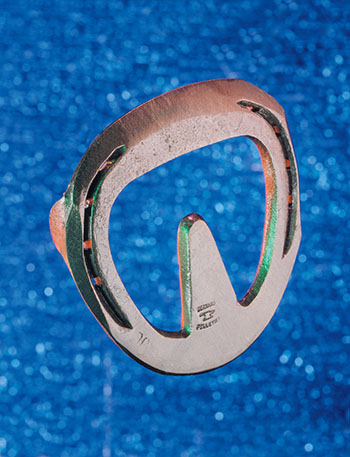 Grooving The Hoof For Founder

Standing The Test Of Time