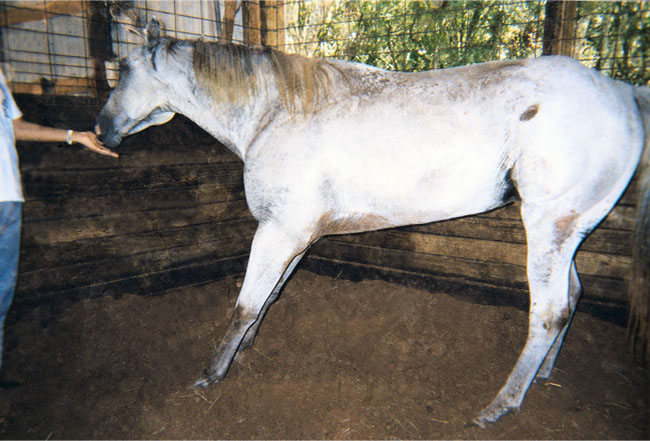 Severity Of Laminitis Is Difficult To Determine

PERCEIVED PAIN. While it’s obvious that a horse suffering from laminitis is in pain, it’s much more difficult to know the severity of the pain.

A common misperception of laminitis is that perceived pain relates directly to disease severity.

Experience dictates that this general relationship is not always true. Some horses can have a combination of foot problems that preclude any hope of a successful rehabilitation, but at the same time, these patients may demonstrate very little lameness. This might occur when the foot develops a gangrenous pathology.

Other horses may show increased signs of lameness but are not suffering from a chronic diagnosis of the disease. This is especially true when the horse enters the early phases of laminitis.

Similarly, an immediate decrease in pain associated with treatment does not always imply an improved prognosis. An example of this is the temporary decrease in lameness that can be realized by unloading the entire sole via elevating the bearing wall with a rim shoe.

In this case, the decreased lameness is achieved as the solar edges of the distal phalanx are unloaded, but in the absence of effective solar support, the foot usually collapses further, worsening the long-term prognosis.

Changes In Stance Or Gait

The second difficulty associated with he use of perceived pain is correctly interpreting the meaning of changes in stance or gait. An example of this is the assumption that the more weight a horse puts on its foot, then the pain in that foot must be…

Premium content is for our Digital-only and Premium subscribers. A Print-only subscription doesn't qualify. Please purchase/upgrade a subscription with the Digital product to get access to all American Farriers Journal content and archives online.
KEYWORDS Foot Pathology gait abnormalities Laminitis Prognosis Laminitis Relief Signs of Laminitis

Proper Application of Pads is Vital to Success

Nothing Is Easy When Tackling Laminitis