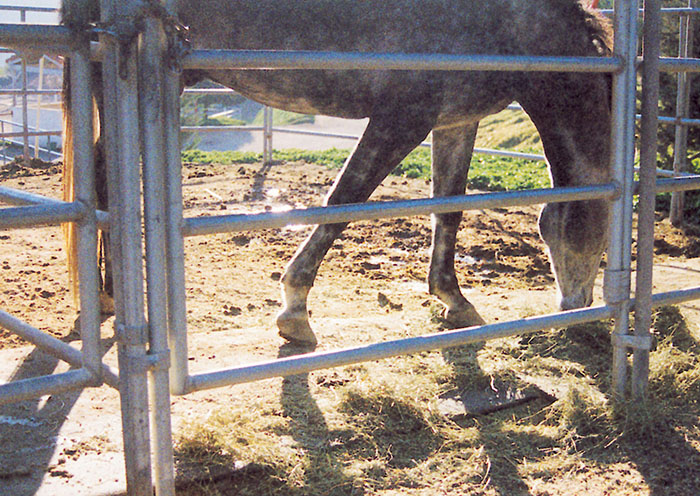 By Scott Brock posted on January 1, 2003 | Posted in Trimming

PASTURE AND PADDOCK FEET. With the normal grazing stance, the heel of the upright foot normally bears no or little weight.

Part of the research on why horses are diagonal-footed animals indicated that it is impossible to have a capsule angle of 55 degrees and still maintain proper alignment of the interphalangeal axis. (See pages 45 to 47 in the December, 2002 , issue of American Farriers Journal.)

No matter how much heel is left on the low foot, it will still not reach 55 degrees. My research indicates that each foot has a different angle according to the breed and the animal’s own grazing stance (Photo 1). This research also indicated to me that there are no perfectly round coffin bones.

As a result, trying to create a symmetrical and plumb bob straight leg is not only impossible, but also likely harmful to the horse. Since the shape of the foot and the angle of the pastern is predetermined by Mother Nature, it’s my belief that they should not be changed.

To add to the validity of my research described in the previous article, I went to a physics professor at California Lutheran College. I asked him to take a set of P1, P2 and P3 bones and place them in the best possible position in order to absorb the trauma of running, jumping or walking.

Using several mathematical equations, he demonstrated how the bones should be aligned in virtually a straight line. This allows the solid structures of…

Balancing The Foot With The Golden Ratio

Let The Foot Tell You How To Correct Imbalances