Horse Sense In The Horse Capital Of The World

They may not have spent much time at the horse farms that give Lexington, Ky., its nickname as the Horse Capital Of The World, but attendees at the 31st annual American Farrier’s Association (AFA) convention in early March had plenty of opportunities to improve their abilities to help the animals.

Approximately 1,000 people attended the event, which ran from March 4 through March 9 in Lexington. And while every AFA convention centers around hooves and horse legs, the 2002 event offered a particularly strong dosage of that particular type of horse sense. The agenda had a heady mix of anatomy labs, leg dissection, addresses from equine veterinarians and shoeing demonstrations.

The Hyatt Regency Hotel served as headquarters of the convention, which was co-hosted by the Bluegrass Horseshoers Association. The Lexington Center housed many of the lectures and the marketplace, while the shoeing competition and Hands-On Clinic were held at the Kentucky Horse Park, a short distance north of the city. 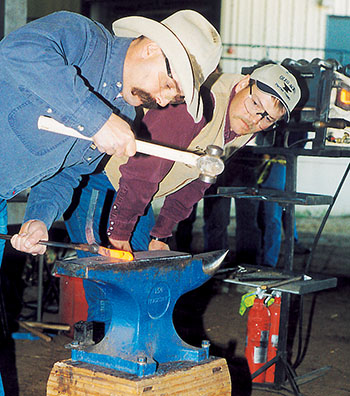 HANDS-ON LEARNING. Martin See, a farrier from West Virginia, works under the watchful eye of Brian Buckner from Fort Collins, Colo., during the Hands-On Clinic.

Dr. Tracy Turner, an equine veterinarian who was the convention’s keynote speaker, delivered a pair of well-received lectures on understand and treating palmer foot pain. Turner also took an active role in the equine anatomy labs, which were packed throughout the convention’s run.