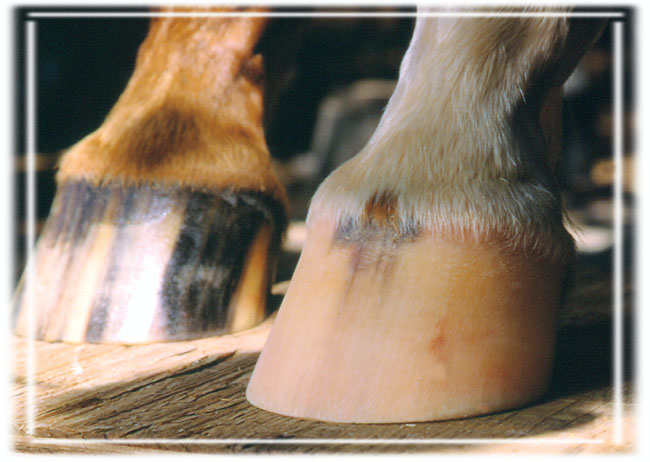 Light Vs. Dark: The Hoof Debate Rages On

By Michael Austin posted on July 1, 2002 | Posted in Education

WHICH IS STRONGER? Can you tell just by looking at two different colored hooves, which one will be stronger? Farriers are on opposite sides of the fence on this issue.

TO EXPLAIN THE VALUE of horses with light hooves, farriers came up with a saying a long time ago:

One white foot, buy him;

Four white feet and a white nose — take off his hide and feed him to the crows.

While shoers aren’t about to put down a horse with all white feet, the saying demonstrates the passion surrounding this black vs. white hooves debate.

Science has been trying to prove that this poem is a myth, but many farriers today still believe that white hooves are structurally weaker than their darker counterparts.

Some farriers are convinced that the color of a foot can be directly related to whether that hoof is going to be strong or weak. However, there are many shoers who will not accept that rationale and claim that the “white is weaker” explanation is just a myth.

“The color of the hoof has little to do with strength, although just about everyone that asks me thinks that a darker hoof is stronger than light,” says Miles Courchesne, Mackay, Alberta, Canada. “I’ve found that hoof strength has more to do with capsule shape; with the rounder being the better.”

Dietary Sugar Vs. the Hoof