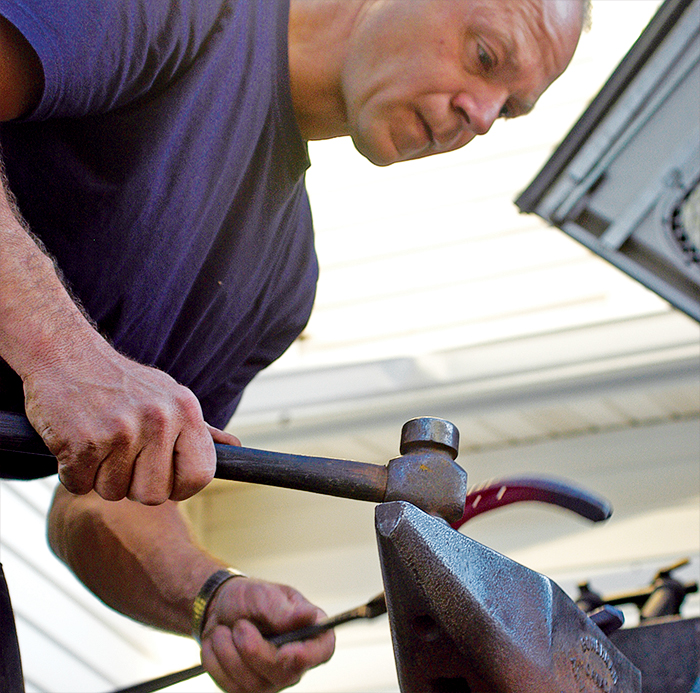 By Pat Tearney posted on December 1, 2010 | Posted in Business Practices

Colorado farrier Jim Quick has honed his skills at the anvil to a high level during years of shoeing horses and participating in shoeing competitions.

Jim Quick is starting his day of “Shoeing For A Living” early this morning. He’s driven into the heart of Denver, Colo., from his home in Longmont, some 45 minutes to the north.

The farrier arrives at a small dressage barn, that’s neatly tucked away in a neighborhood of very nice homes, not far at all from the Mile High City’s busy downtown business district.

Dawn is just beginning to color the morning sky as he backs his truck up near the barn entrance and sets up for the day’s shoeing.

Quick is a morning person; “I grew up on a ranch. If you weren’t up and doing something by 5 a.m., everyone wanted to know if there was something wrong with you,” he say. But he usually doesn’t start shoeing until a little later in the morning. He explains that the reason for today’s early start is twofold.

“Rush hour traffic in Denver is usually really bad,” he says. “So when I have to come down here, I like to beat the traffic.”

But the bigger reason has to do with the first horse he’s shoeing. Prince is a big Dutch warmblood with a quality pedigree, top Grand Prix finishes and a hefty price tag. The trainers at the barn don’t exactly want Prince handled with kid gloves, but they want to hold…

From Foal Barns to the Red Mile