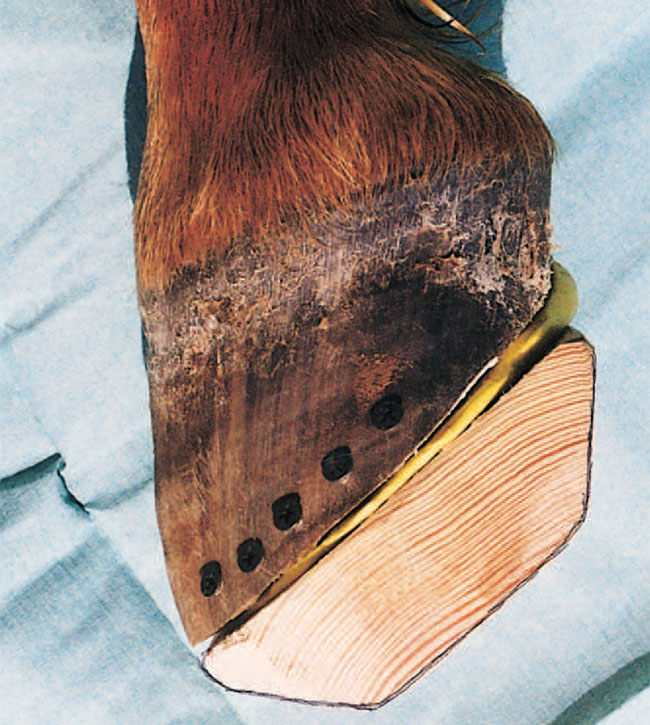 AAEP In The Big Easy: Tackling Laminitis On A Buidget

By Pat Tearney posted on January 1, 2004 | Posted in Therapeutic Shoeing

WOODEN SHOE. The rocker-toe, rocker-heel design of the wooden shoes developed by Dr. Micheal Steward was designed from the shape of a plywood shoe worn by a foundered mare to protect a protruding, painful coffin bone. You can see the sole impression material used in the process between the hoof and the shoe.

Michael L. Steward probably won’t argue if you tell him you can put together a nicer looking shoe than the wooden ones he sometimes uses to treat horses with acute or chronic laminitis.

But he may ask you if you can do it as cheaply.

Like it or not, the equine veterinarian from the Shawnee Animal Hospital in Shawnee, Okla., says that cost can be an important consideration in the treatment of laminitis.

“In Oklahoma, we have a lot of horses, but not much money,” he told attendees at the annual convention of the American Association of Equine Practitioners in New Orleans in November. “It’s hard to tell an owner that you want to charge $150 to help a horse that he only paid $75 for when he bought it at auction.”

Steward has developed his atraumatic therapeutic shoes, which combine shoes made from wooden blocks with sole impression material (See American Farriers Journal, May/June, 2002, Pages 45 through 49) in an effort to combat the many obstacles to treating laminitis. He says those obstacles can include problems with: