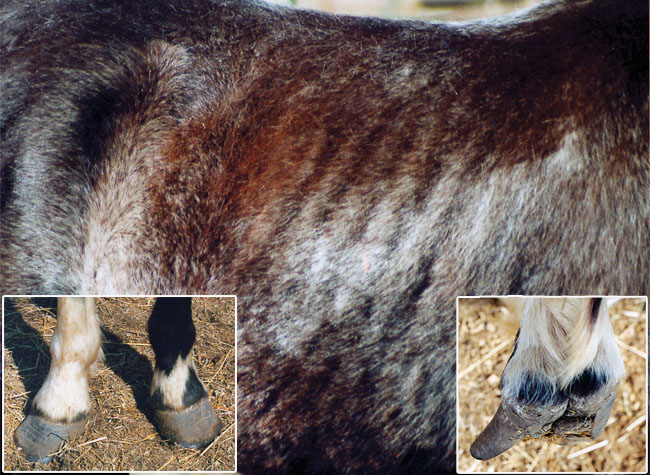 By Lynda Layne posted on January 1, 2004 | Posted in Education

You pick up a hoof and are appalled by what you see. Here’s how a trio of farriers handle cases of hoof neglect.

COUNT THE RIBS. (Top) Signs of malnutrition showed up in a dull coat that should have already been shed. The filly’s ribs and hip bones were also protruding. NEGLECTED FEET. (Bottom left) The filly’s hooves showed tell-tale, badly distorted growth rings and were badly splayed. HEEL PROBLEMS. (Bottom right) The filly’s left front foot had a badly sheared heel.

Nothing disheartens a farrier more than extreme neglect of a horse’s feet. Sometimes, neglect is an issue because the owner doesn’t want to spend the money to have the horse worked on regularly. But there are many instances of neglect that simply stem from a lack of owner education.

It’s hard for a farrier to witness blatant signs of neglect, regardless of the cause. But how the shoer approaches the issue with a horse’s owner can make the difference of whether or not the horse gets the help it needs.

Three farriers give their views on just what constitutes neglect, why they think it happens and how they successfully communicate with the owners of neglected horses.

Tom Keith worked on and off as a farrier from the time he was a teenager until about 12 years ago when he went to it full-time. He shoes at a lot of show barns, but also works for what he calls “everyday people.” He’s seen neglect over the years, but thinks it can be a misunderstood term. While some horse owners might purposely neglect their horses, Keith doesn’t think…

A Safe Approach to Shoeing Stallions