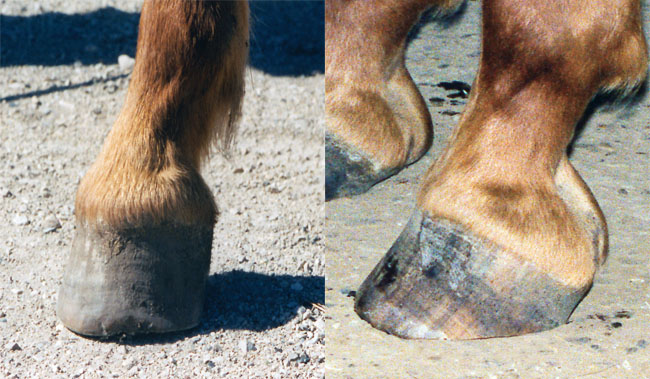 By Michael Austin posted on December 1, 2003 | Posted in Therapeutic Shoeing

17 MONTHS OF SUCCESSFUL CLUB-FOOT TRIMMING WORK. Check out how this left front club foot actually changed over a 17 month period. During this lengthy period of time, the foot was trimmed on an average of every 3 weeks.

There's certainly no single way to help a horse suffering from a club foot, but American Farriers Journal took the time to document one case that has seen incredible results over nearly a 1 ½ year period.

Working with Dawn, a 16.2 hand, 12-year-old sorrel-colored National Show Horse that has been suffering from a left front club foot, has been Sheldon Olsen. Over 17 months, the Stillman Valley, Ill., farrier has worked on this horse every 3 to 4 weeks. By doing so, he’s had a chance to implement some of his own club foot theories along with a few controversial ideas to come up with some ideas that might help a number of farriers working on club-footed horses.

Injury Is A Mystery

Dawn’s owner, American Farriers Journal art director Maureen Splitgerber, adopted the horse in the spring of 2002. Splitgerber knew the horse had a club foot on the front left leg, but the owner didn’t have any specifics as to what caused it or if it was a naturally occurring condition.

The owner had purchased Dawn as a 2-year-old and the horse already had the club foot at that point in her life. Splitgerber says the owner indicated nothing special had been done in the 10 years she owned…