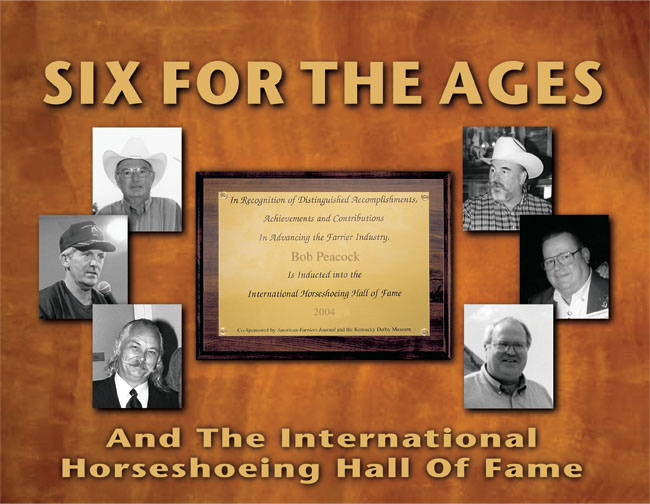 By Ron Perszewski posted on December 1, 2003

Farriery has been more than just a job for these shoers, who have touched many lives and the industry at large.

THE NEW INDUCTEES. Here are the newest members of the International Horseshoeing Hall Of Fame. Charlie Brown (top left), an icon at Arabian shows, the sultan of shoeing; Billy Neville (middle left), spreading highquality horseshoeing in Australia; Jack Miller (lower left), his excellence as a shoer put him alongside others considered the best; Lee Liles (top right), a best friend to many lame horses through the years; Bob Peacock (middle right), not even a horse could knock him out of the farrier business; Bob Schantz (lower right), if he tells you a rooster will plow, harness the bird.

Being among the world’s best at something — anything — is a fantasy for many people. For a smaller number, it is a driving force in life. And for a select few, it is a reality. That select group officially grows just a little larger with the induction of six new members into the International Horseshoeing Hall Of Fame.

The inductees were chosen for the Hall Of Fame, jointly sponsored by the American Farriers Journal and the Kentucky Derby Museum, using the following criteria: the benefit they have provided to horses through their work, their contributions to the…