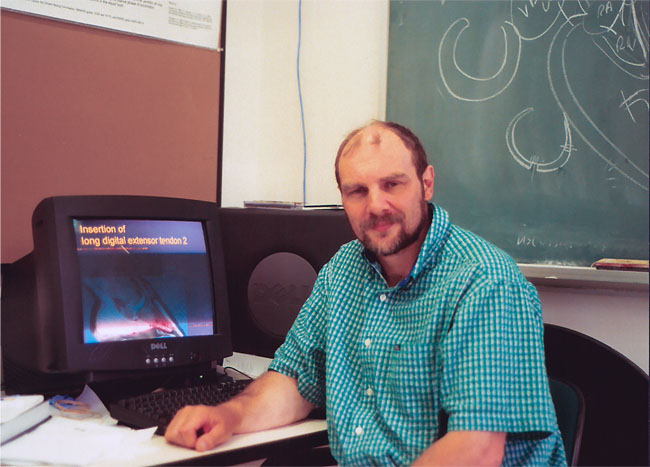 By Pat Tearney posted on December 1, 2003 | Posted in Education

DECADE OF RESEARCH. Jeff Thomason, a professor of biomedical science at the University of Guelph in Ontario, has spent 10 years researching the biomechanics of the horse’s hoof.

Farriers aren't necessarily an impatient lot, but they do have a certain tendency to want to get on with things.

If a farrier tries a particular technique or method on 10 horses and it seems to help eight of them, he’ll probably figure he’s on to something. He’ll try it again, modify it a little, perhaps identify certain conditions under which it doesn’t seem to work. He might share it with one or two fellow shoers, who make their own modifications and pass it on to a couple of more farriers. It isn’t long until it shows up as a topic at a clinic, or as the subject of a story in American Farriers Journal.

It’s quite a different story, though, for those involved in scientific research. Our farrier’s 10-horse “study” wouldn’t even scratch the surface.

Consider the work of Dr. Jeff Thomason, professor of biomedical science at the Ontario Veterinary Research Center at the University of Guelph in Ontario, Canada. He’s been studying the biomechanics and biology of horses’ hooves from a scientific perspective for more than 10 years. He’s excited about the results and progress of his work, but he’d be the first to admit that he and his research team have barely begun to uncover everything they’d like to. But one of his goals is the same as that…

Farriers And Research: A Possible Role