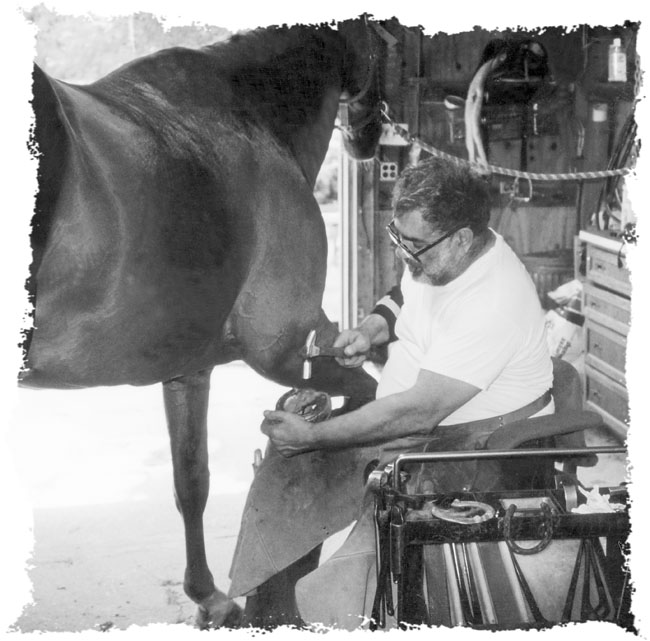 Handicap Not Holding Back Determined Shoer

By Michael Austin posted on December 1, 2002 | Posted in Education

NO STOPPING HIM. Being forced to shoe from a chair due to a debilitating disease, Seymour Russo says he’ll have to be dead before he stops shoeing.

Switching careers at the age of 50 is not a standard practice, especially for a skilled farrier who has been shoeing horses since the age of 13.

So, when Seymour Russo became confined to a wheelchair 15 years ago, the West Milford, N.J., farrier wasn’t about to give up one of the passions in his life. Instead of ditching his clients, he developed a new way of going about an age-old profession and is still shoeing horses to this day at the ripe age of 65.

How Russo ended up in a wheelchair is almost as unbelievable as shoeing horses from a wheelchair. Russo went in to the doctor’s office for a flu shot in 1987 and his life hasn’t been the same since.

Unfortunately for this dedicated shoer, a rare and adverse effect of becoming immunized to certain diseases is the development of Guillian-Barre syndrome. That’s what happened to Russo and as the syndrome attacked his nervous system, he became unable to walk.

His doctor’s advice was to lay off physical labor (such as horseshoeing) and find a less strenuous way to spend his days.

But Russo wasn’t ready to cut horses out of his life forever. He had learned how to shoe horses in Brooklyn, N.Y., when he was barely a teenager and there wasn’t a…

Don't Be The Best Shoer You Know

Can a Scottish Shoer Earn British Registration in the States?

You Know You're A Lady Shoer When...