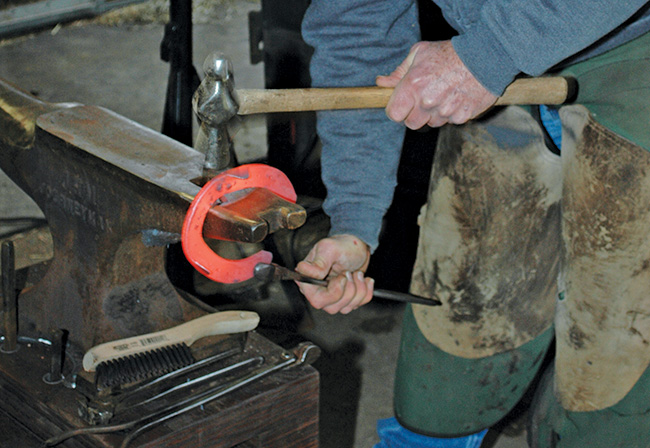 By Pat Tearney posted on September 1, 2010 | Posted in Shoeing

Mark Voorhis bases his shoeing on horsemanship, well-honed skills and a keen sense of observation

The career of Mark Voorhis, a farrier from Salem, Ore., has been an odyssey of sorts, not only from his Florida origins, but also across the equine industry. In addition to shoeing, Voorhis has been a trainer and spend several years breaking young horses for a large Arabian horse outfit.

The day is about what you expect for western Oregon in late February; grey and damp, with atmospheric moisture varying from a heavy mist to a steady, light rain. The hills south and slightly west of Portland are a deep green. At a farm set back in a cove between a couple of those hills, Mark Voorhis has come to spend a Tuesday “Shoeing For A Living.”

8:30 a.m. Voorhis is already at work on his first horse of the day, a gelding named Monte Carlo, who goes by Monty for short. Voorhis has set up for his shoeing in a shed just across the drive from the main barn. The shed holds some of the maintenance equipment used for the barn, but has plenty of open space for the farrier to work. It also has adequate lighting for the job, is out of the traffic lanes for horses being led around the barn and keeps shoer and horses out of the weather.

Monty is relatively new to this barn and to Voorhis’ shoeing book. He was purchased as a school horse and Voorhis says when he first saw him, he spent months in a muddy pasture and “his…

Tools that aren't Found in a Shoeing Box