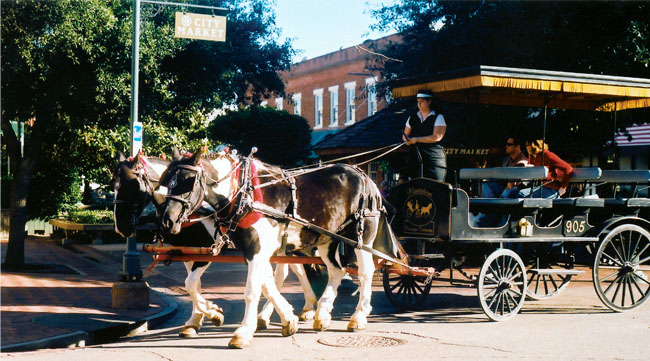 Signing Up for the Draft

By Pat Tearney posted on January 1, 2004 | Posted in Disciplines & Breeds

DOING THE TOWN. Tom and Jerry, a team of American Spotted Draft Horses, head out on the streets of Savannah, Ga. The carriage is owned by Plantation Carriage Company, one of three such companies that operate in the picturesque city. Lori Carpenter is at the reins.

Dark clouds hang low over the Savannah River as Steve Prescott sets up his shoeing rig just outside the doors of the old stable that houses the horses and equipment of the Plantation Carriage Company on the outskirts of the picturesque city of Savannah, Ga.

The forecast this mid-November morning is for rain, which has an upside as well as a downside for the certified journeyman farrier who had driven a short distance from his home just north of the river in South Carolina.

The upside is that the rain will mean that he won’t be under any pressure to finish up the horses so they can get about their business of pulling carriages loaded with tourists around the old streets of the city, as they enjoy the antebellum architecture and listen to tales of the city’s haunting and haunted history from carriage drivers.

The downside is that he may get a little wet. He’ll be working on the horses themselves while undercover, but his forge, anvil and other shoeing equipment will be sitting outside. He’ll get a certain amount of cover from the swing-up doors of his shoeing rig, but some dampness is inevitable.

Such is Shoeing For A Living in the southern…

The Case For Making Sure You Have A Back-Up Plan

Tips for Working with Draft Horses

Understand Drafts' Farriery Needs Before Picking Up The Foot