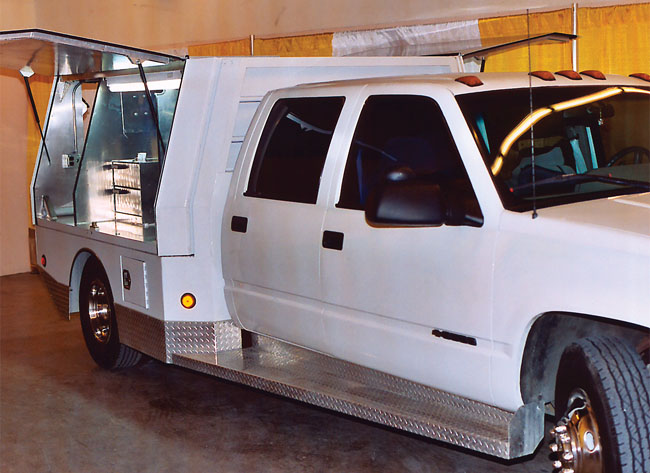 A Dream On Wheels

By Ron Perszewski posted on March 1, 2004 | Posted in Equipment

This farrier’s vision of a customized shoeing truck becomes a ready-to-roll reality.

CLEAN AND TOUGH. Heavy-duty aluminum running boards and skirting add to the durability and looks of this seemingly new rig owned by Mike Rogers.

It's hard to believe that the rig Mike Rogers recently displayed at the first annual International Hoof-Care Summit in Cincinnati is actually a 1996 Chevrolet pickup with 75,000 miles behind it. A fur-faced farrier could shave with an old hoof knife in the reflection from the new, shiny white paint on the crew cab, but it’s the just-finished, customized body and trim by Purdybilt Bodies & Equipment that demand a closer look.

Heavy-gauge aluminum running boards and skirting around the bottom give the truck a tough-as-nails appearance, while the body filling the pickup’s 8-foot bed is pure beauty for most any shoer. Built by Neil Purdy with help from Rogers, who shoes in the Paris, Ky., area, the versatile rig holds the expected gas forge, anvil, tool and shoe racks, and plenty of bins and drawers.

Rogers fit the rig with two drill presses and a variable-speed band saw on a sliding mount for easy access, and he also installed a 110-volt electric welder with a 100-foot extension cord. He calls the welder “a very handy thing to have,” but cautions that not every barn has an electrical system that can handle it.

So Rogers installed brackets for acetylene and oxygen tanks, giving him the option to weld with gas.

Don't Depend on Luck When Choosing a Specialty Hammer

A Rig for the Ages