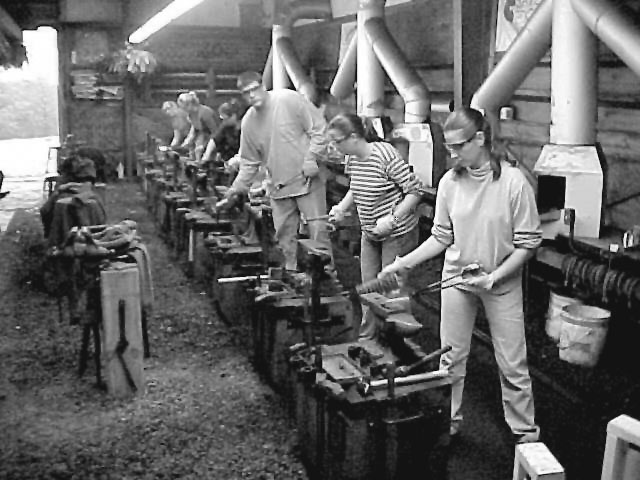 Bridging The Gap: An educator's attempt at enhancing farrier-vet relations

FIRE ’EM UP. Veterinary students from Virginia Tech get in some iron work at the forge at Danny Ward’s School of Horseshoeing in Martinsville, Va. The students were there as part of a program put together by Ward and Dr. Scott Pleasant, designed to give the fourth-year students an understanding of what farriers do.

Some time ago, Dr. Scott Pleasant from the veterinary school at Virginia Tech University in Blacksburg called and ran an idea by me. He wanted to know if I would consider working with a small group of fourth-year veterinary students for 3 weeks on the basic procedures and mechanics a farrier deals with on a daily basis.

My first question was: Does anyone in this group have any intentions of learning to shoe horses in 3 weeks and using these skills in their equine practice? Pleasant reassured me that this was not the idea behind this block of their education.

Only eight of this class of 91 were going to specialize in equine medicine. They realized how important our work was in helping them in their practice. Pleasant asked me to give it some thought and said he would get back to me.

These blocks of time had to be planned a year in advance. I normally don’t even think a year in advance and had never attempted anything like this before. I needed a little time to deliberate. After a few weeks, we talked again and I agreed to give it a try, especially since…

Win Super Prizes At The Summit