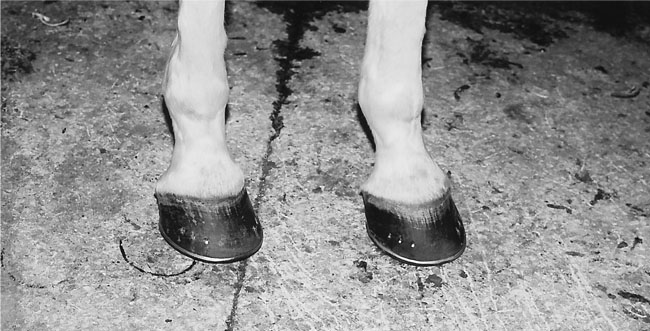 By Ron Perszewski posted on March 1, 2004 | Posted in Shoeing

Left and right hooves might make a good set, but properly fit shoes aren’t likely to be identical

DIFFERENCES AREN’T OBVIOUS. A casual look at the feet doesn’t always reveal the slight variations between the left and right hooves. Of course, fitting the shoes requires a much closer look.

START A DISCUSSION about the finer points of shoeing healthy hooves these days, and the talk will probably turn to balance, or maybe symmetry, or even shod versus barefoot feet.

But you probably won’t hear anything about left and right feet. The distinction seems to have disappeared from the minds of farriers. Just don’t tell the horses.

“Horses have right and left feet, just like ours,” says Donald Jones, a farrier for nearly 40 years in the Pleasant Garden, N.C., area. “You don’t put your own left shoe on your right foot when you get up in the morning. You don’t even have to think about it. A horseshoer should be that familiar with the way a horse’s foot looks so he can shape the shoe for right and left.”

Longtime farriers know that overlooking the differences between the two sides creates a less than perfect fitting that helps separate veteran shoers from their inexperienced colleagues.

Says Jones, “Many of the old-timers would talk about right and left. That was the way you would feel out another horseshoer. You would ask him if he shoes right and left, and if he said yes, you knew he’d been doing it long enough and well enough to pick up on the fine details.”

Jones passed that knowledge to…

Photographing Your Work As A Farrier: Help Or Hindrance?