By Jeremy McGovern posted on January 1, 2009 | Posted in Business Practices

Given the right tools, Mateo Gonzales overcame a physical deformity to become a successful farrier

When Mateo Gonzales arrived in the United States with a green card for agricultural work, he only looked for employment cleaning horse stalls. While growing up in rural Mexico, that was all he could aspire to be.

Born with a deformed right hand, Gonzales was told he would be unable to handle most duties for jobs that require the dexterity of using both hands.

Although he lacked outside encouragement to move beyond being a barn cleaner, he had an interest in horses beyond spreading hay or shoveling manure. When he found employment with Bob Smith, farrier and owner of Pacific Coast Horseshoeing School (PCHS) near Sacramento, Calif., his way of thinking changed.

The immigrant worked in Smith’s barn, cleaning and taking care of the horses. When a trainer left Smith’s employment, Gonzales expressed his interest in training. The two discussed how he could move beyond the stable work. Being a trainer still interested him, but working with farriers and spending time around the shoeing school had peaked his interest in hoof care.

“I saw the trucks they drove and how much money they could make,” explains Gonzales. “It was nothing like in Mexico, where farriers made nothing — horses there were used for work, not pleasure.”

Gonzales was still reluctant though, wondering how he would handle the tools, while controlling the horse. If his right hand couldn’t get a strong grip, how could he properly shoe a horse? 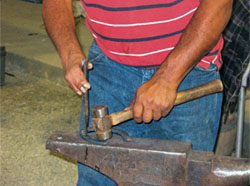 With practice, forge work, like punching holes in a shoe on an…