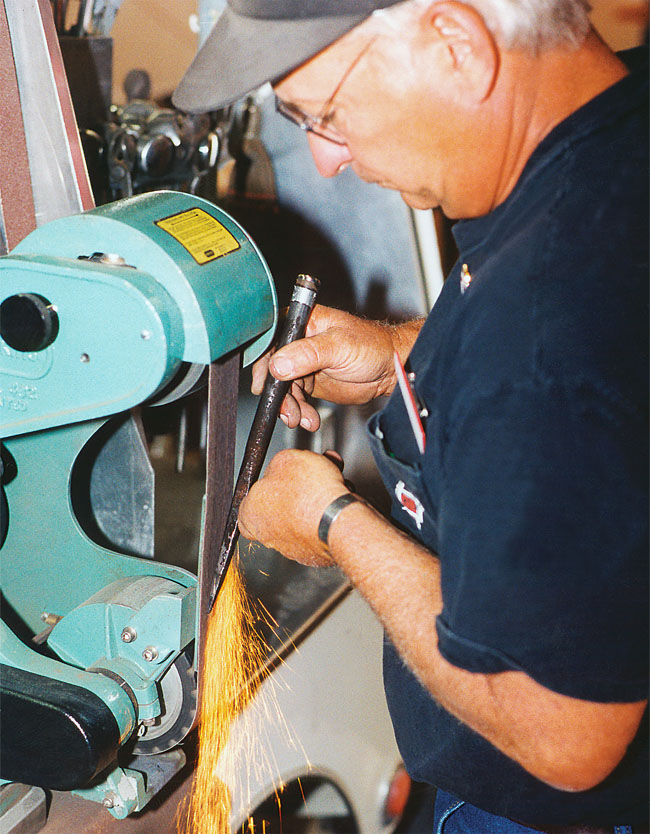 POWER TOOL PAYOFF. Dan Bradley uses a belt sander in his rig to sharpen a pritchel. One of the added values to having power tools in your rig is the ability to quickly put new edges on tools such as hoof knives and pritchels, which helps shoeing go more efficiently.

Farriers are always looking for an edge to help them become more efficient in their business and to make their shoeing work a little bit easier. That’s where power tools come in.

But since the vast majority of farriers find space inside a shoeing rig is limited, extra planning and care needs to put into decisions such as which power tools to carry, how to set them up inside the rig and what sort of power source is best to run the equipment.

According to Brent Chidsey, a former farrier and owner of Stone Well Bodies and Equipment in Genoa, N.Y., the “Big Three” among power tools in shoeing rigs are hand grinders, drill presses and belt sanders/grinders.

“Ninety-nine percent of all farriers have either one or all of them in their shoeing rigs,” says Chidsey. “There are also lots of people who have welders. A small percentage of farriers also carry generators, along with things such as air compressors and vacuums.

“They use the vacuums mainly for cleaning the inside of their rigs or using the blower setting to blow out debris. Most people who put air compressors into their rigs aren’t doing so to run…

Power to the Shoer