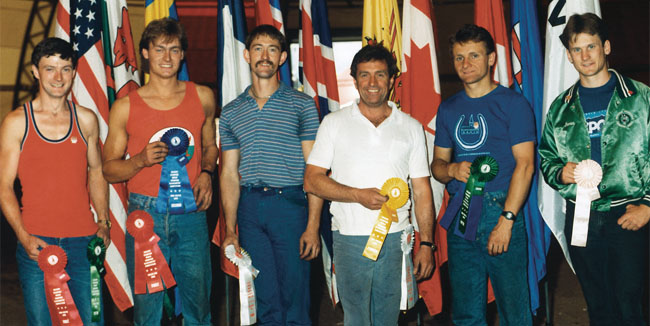 On July 12, a small group of elite farriers from around the world will gather on a stage in Calgary, Alberta, Canada, each standing in front of his nation’s flag. A crowd of 20,000 will applaud and cheer so loudly that the farriers won’t be able to hear anything else, and they will actually feel the vibrations in a moment they will remember for the rest of their lives.

“It’s an incredible thrill, an absolute rush,” says Marshall Iles, who as chairman of the World Championship Blacksmiths’ Competition has stood on stage for many of the event’s award ceremonies.

This year’s awards ceremony, which will recognize the World Champion Blacksmith and the leading competitor from each nation represented, will close the 25th anniversary edition of the annual competition. That’s a quarter-century of honoring the world’s best horseshoe-makers, putting farriery in the spotlight for a mass audience and preserving the craft, science and art of blacksmithing.

One key to the ongoing success of the WCBC was finding a home within the Calgary Stampede, an agricultural fair dating to 1912 and billed as “The Greatest Outdoor Show In The World.” It’s evolved into a 10-day, $250 million international fair featuring world-class exhibits, art shows and entertainers, a midway and “something for everybody,” says Iles, a Calgary, Alberta area…