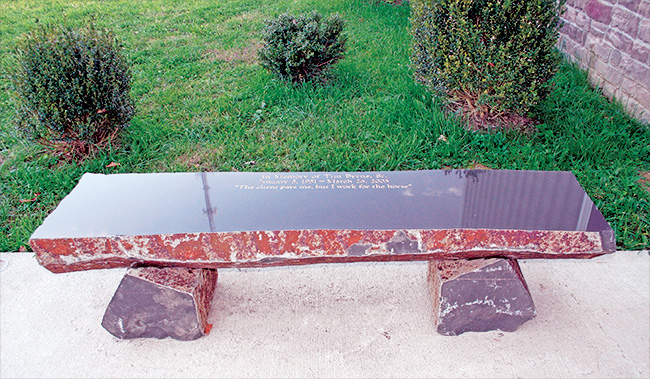 Indiana Farriers Association Dedicates A Stone Bench In Memory Of Member And Past President, Tim Byrne

Family, friends and fellow farriers join together to remember their mentor at dedication ceremony in Richmond, Ky.

This stone bench was given to the Kentucky Horseshoeing School in memory of Tim Byrne. It reads, “In Memory of Tim Byrne, Sr. January 5, 1951-March 26, 2005. “The client pays me, but I work for the horse.”

Vince Lombardi once said that the quality of a person’s life is in direct proportion to his commitment
to excellence, regardless of his chosen field of endeavor. No one took that philosophy to heart more in his own farrier career than Tim Byrne Sr.

Byrne, who passed away in 2005 from amyotrophic lateral sclerosis (ALS, or Lou Gehrig’s Disease), started his farrier career in his early 40s. From the start, he strived to become certified and continue learning as much as he could, says his son, Tim Byrne Jr.

Byrne joined the U.S. Navy in 1969, just 2 weeks shy of his high school graduation. Receiving his diploma while in the Navy, he became a master machinist and worked for 2 years on a tanker during the height of the Vietnam War.

After he got out of the Navy, Byrne took a job as a machinist for the Naval Ordinance Station in Louisville, Ky., and worked there for 22 years until it shut down. Taking early retirement, Byrne needed to find something to do, but the area was flooded with machinists looking for work.

“At that time, my little sister had gotten a pony and we didn’t know anything about horses,” says Byrne Jr. “My dad found out that horses needed…

In Memory Of Bruce Daniels: Articles From The AFJ Archives