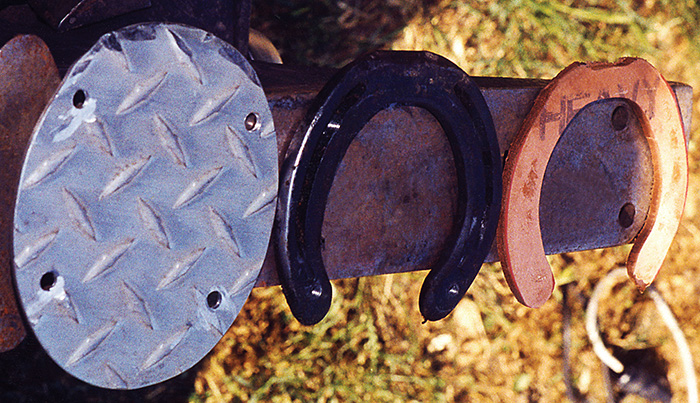 By Ron Perszewski posted on April 1, 2005 | Posted in Therapeutic Shoeing

Also, consult a veterinarian, who might choose to enhance treatment with radiographs and medication

PARTS INVENTORY. Three common elements of a hospital plate include (from left) the removable plate that is mounted to the ground surface of the shoe, the shoe itself and a rim pad. A pad is not necessarily used with every plate plate.

Farriers moving from horse to horse commonly encounter hoof abscesses. Often during treatment, a severe hoof abscess or other foot problem will expose sensitive tissue, necessitating more extensive measures such as a veterinary examination and the application of a hospital plate.

“A routine abscess usually just needs drainage, a foot pack and keeping the foot clean until the area stops draining and the horse is sound,” says Morrison. “Then the foot goes into a shoe and a pad.”

He recommends a hospital plate, often called a treatment plate, when sensitive, exposed tissue needs protection from trauma or bruising. Such cases include, he says, an extensive abscess, a coffin bone debridement, removal of a keratoma and other surgical procedures performed on the bottom of the foot.

O’Grady agrees, noting that a removable treatment plate allows observation of the affected area, application of medication and protection of the foot.

He adds, “It’s used as a transition from the time of the injury or surgery until the time that you can cover the foot with a…

Hospital Plates Effective For Management Of Laminitis, Other Hoof Problems