The Farrier’s Role In Keratoma Cases 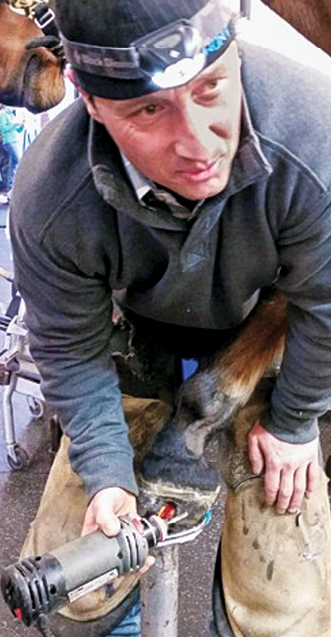 Joe Santos of Woodbury, Conn., debrides the hoof wall of a horse that has a keratoma at Fairfield Equine Associates in Newtown, Conn. Santos is performing a window debridement, which is slightly larger than the tumor.

Keratomas are small, benign tumors usually found between the stratum internum and the coffin bone. In rare cases, it has been seen on the dorsal aspect of the coffin bone.

The cause of keratomas is unclear, but it might be attributed to chronic irritation or trauma. Usually spherical in shape, although they also can be cylindrical, what makes keratoma distinct from other tumors is a keratinized outer shell that is the consistency of hard rubber. As the tumor size increases, it places added pressure on the sensitive parts of the inner hoof causing lameness.

Often no outward manifestations of the tumor are evident on the exterior of the hoof unless the tumor is large and quite advanced. Clinical signs can be intermittent lameness with no identifiable cause, but occasionally a discharge will erupt on the distal margins of the sole (Figure 1). A veterinarian can confirm the diagnosis with radiographs, but occasionally an MRI is the only way to identify and locate it.

Many farriers go through their entire careers without being involved in a keratoma case, but Joe Santos from Woodbury, Conn., has worked on dozens. He is the go-to farrier at Fairfield Equine Associates in Newtown, Conn., one of the leading equine referral hospitals in the Northeast. They get the tough…