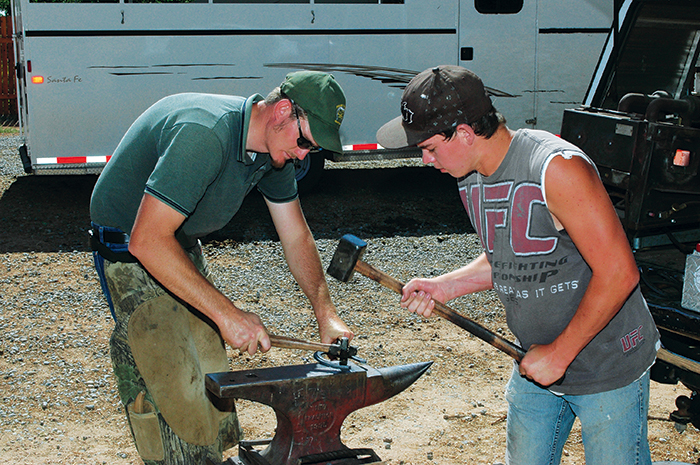 By Pat Tearney posted on September 1, 2009 | Posted in Forging, Shoeing

Jacob Manning, left, and his nephew, Dennis Manning, team up to make a size 1 1/2 shoe from a size 1 keg shoe. Jacob’s forging skills and Dennis’ ability to work as a striker came in handy with a horse whose feet were a little too big for 1s, but not quite big enough for 2s.

Cool mornings, Utah and June don’t seem to belong in the same sentence, but it’s a cool June morning in Roosevelt, Utah, as Jacob Manning pilots his shoeing rig from the parking lot of a local restaurant where he and his nephew, Dennis, met me for breakfast before heading to their first shoeing stop.

Cool mornings are unusual in Utah — at least in late June, but Manning says it’s been an unusually cool and wet summer so far up here in the mountains.

“Usually, by this time of the year, hooves are like rocks,” he says. “But not this year.”

That has its ups and downs for Manning. It’s easier on his hoof knives and the weather doesn’t drain him as much. On the other hand, he’s been dealing with more lost shoes than he usually does, which he attributes to soft feet and horses spending more time in mud.

8:20 a.m. Manning’s first stop of this Shoeing For A Living Day is about 30 miles east of Roosevelt. Roosevelt itself is around 150 miles south and east of Salt Lake City, across the Wasatch Mountain range.

Manning says he usually starts his…

Forging a Heart Bar has Never Been Easier