A Winding Road to a Veterinary Clinic

By Pat Tearney posted on July 1, 2005 | Posted in Therapeutic Shoeing

Back in the late 1980s, Pat Reilly thought there were veterinary clinics in his future. He was right — but a fork in his career path took him there by a different route than the one he’d originally planned.

Back then, Reilly was a student at the University of Vermont. He hoped to go to veterinary school after he earned his degree.

“But I ran out of money during my junior year,” he recalls. “So I started looking around for some other options.”

Reilly considered an option that has been a good one for a number of practicing equine vets.

“Horseshoeing school was only 12 weeks,” Reilly recalls. “I thought I could learn to shoe horses and use that to put myself through veterinary school.”

So Reilly left Vermont and headed for Illinois, where he attended the Midwest Horseshoeing School. After completing school, he started working with other farriers and building his own book, finding that he had an aptitude and liking for the work.

And somewhere along the way, his dreams of vet school sort of faded away.

But he wound up in a vet clinic anyway.

Reilly has been the farrier for the Rochester Equine Clinic in Rochester, N.H., since 2000. That means most of the horses he provides footcare for are problem horses. In practice, it means he uses a lot of glue-on shoes, as illustrated by a fairly typical day of Shoeing For A Living he put in during early May. 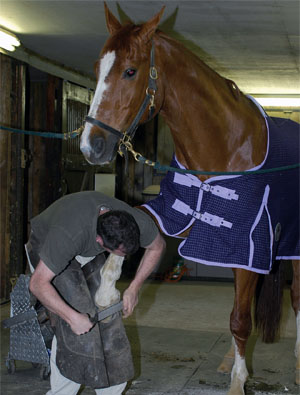 There's No One Way to Pack a Hoof