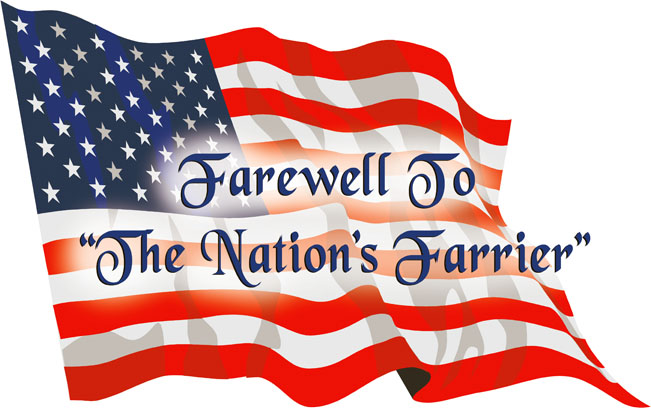 Farewell to the Nation's Farrier

A gray drizzle fell from Virginia skies in what could have been a somber reflection that marked the end of a legendary career. The retirement ceremony of Peter H. Cote, Caisson Platoon farrier/blacksmith, was held at Fort Myer, Va., on May 24.

Cote’s 35-year career was celebrated in ceremonies presented by the 1st Battalion 3d US Infantry Regiment, better known as The Old Guard. Formed in 1784, it is the oldest active infantry regiment of the Army and plays a significant role in the nation’s ceremonial events.

The Old Guard is responsible for the care and military
presentation of the caisson horses used for state and full-honors funerals at Arlington National Cemetery, and for military ceremonies for the White House, Pentagon and the national monuments. The Old Guard also provides the honor guard at the Tomb of the Unknown Soldier.

Started In The Army

Drafted out of Martinsville Farrier School in 1969, Cote actually wrote to higher authorities, letting them know they were misusing his talents by training him as a heavy artilleryman. The Pentagon responded by placing him in two secondary military occupational specialties, 44D Blacksmith and 91T Vet Tech and transferring Cote to the regiment in 1970. Discharged in 1971, Cote was hired as the Army’s only civilian blacksmith/farrier, keeping him at Fort Myer.

During his career, he has prepared the hooves of the caisson teams for the state funerals of President Ronald Regan, President Lyndon B. Johnson and General Omar Bradley, as well as for those of…

Horses Add To The Solemnity Of Arlington National Cemetery