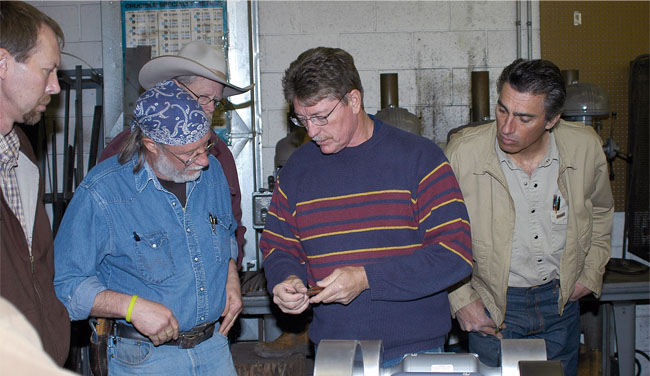 PRIMER ON PLANNING. Dave Farley, a farrier from Coshocton, Ohio, talks with farriers about business planning during a clinic at Centaur Forge in Burlington, Wis. Farley likes to say that “Farriers don’t plan to fail, they fail to plan.”

At some point in their careers, a lot of farriers have a disturbing epiphany. It goes something like this. “You know, I’m getting to be pretty good at this. I understand what I’m doing. My forging and other shoeing skills have gotten a lot better. I’m in demand. My book is full. So why don’t I ever seem to get ahead financially?”

A lot of farriers ask themselves that question, but not enough of them think enough about the answer. Dave Farley, a certified farrier from Coshocton, Ohio, says the answer is actually pretty basic.

“We’re very good at shoeing horses,” Farley told an audience during a clinic at Centaur Forge in Burlington, Wis. “We stink at business.”

Farley has another saying he’s fond of repeating.

“Farriers don’t plan to fail,” he says. “They fail to plan.”

Farley admits he didn’t have that epiphany moment himself as early as he wished he had. “I was not a good enough planner,” he says. But he’s making up for lost time. He’s now part of a mutli-farrier business and he clearly thinks it’s the way more farriers…