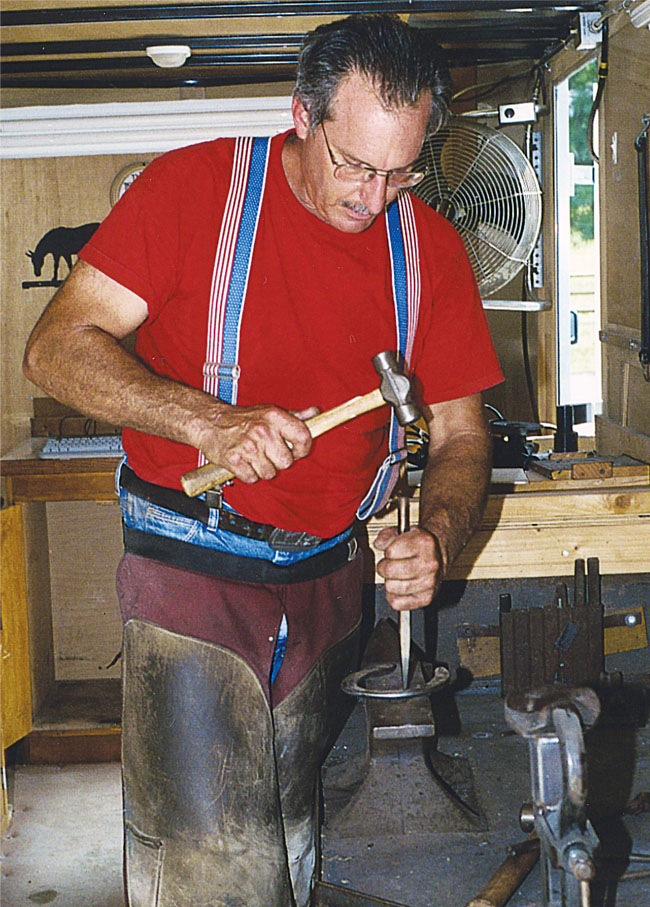 By Pat Tearney posted on December 1, 2005 | Posted in Shoeing, Trimming

ROOMY RIG. Martin Kenny pritchels a nail hole on a shoe inside his shoeing rig. The well-lit trailer has plenty of room for the farrier to work.

It’s a pleasant summer morning near Carthage, N.C., as Martin Kenny gets ready to go to work. The day promises to be a warm one, but the veteran farrier says the temperature isn’t likely to reach the high 90s as it had regularly in the past few weeks. Still, Kenny plans on starting his “Shoeing For A Living” day early — before the heat begins to build.

Kenny is a self-described “early riser,” who likes to get up and enjoy a hearty breakfast with his wife, Diane, and take care of some of the chores involving his own animals before he begins his shoeing. Today, his first customers are actually coming to him, giving him a little additional time to get ready for his day. They’re not due until 8 a.m., but Kenny is already in his workshop a little after 7, preparing his tools and shoeing area.

7:12 a.m. The workshop is located in a small barn that has a sign bearing the title, “Hoof Redevelopment Center.” The name is a significant one, because hoof redevelopment — rather than development — has become Kenny’s guiding principle. After more than 30 years of shoeing, he’s focusing more and more of his work on horses with problem hooves and treating them with a style of trimming and shoeing that he calls “Symmetrical Horseshoeing” and…

One Farrier's Approach to Shoeing Drafts