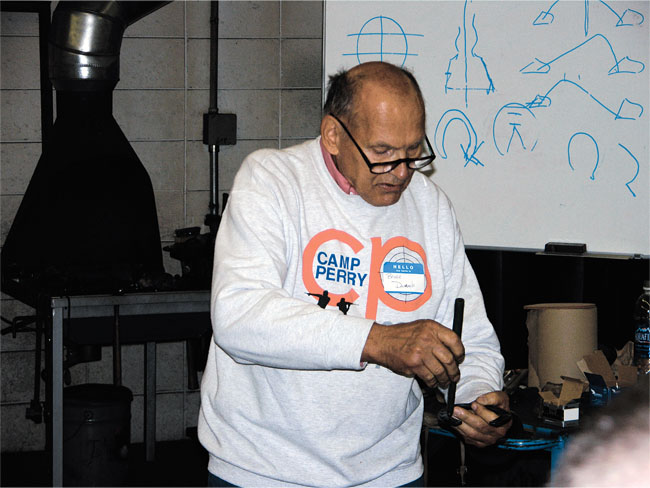 Tips For Everyday Shoeing From One Of The Legends: Bruce Daniels

By Ron Perszewski posted on December 1, 2005 | Posted in Equipment, Shoeing

Bruce Daniels offers a few pointers he picked up during his Hall Of Fame career that just might make your life easier, too

VOICE OF EXPERENCE. Bruce Daniels has been shoeing for decades and has earned his way into the International Horshoeing Hall of Fame. Here he demonstrates techniques in a seminar at Centaur Forge during a visit to Wisconsin.

Now in his 70s, International Horseshoeing Hall Of Fame member Bruce Daniels still dances around an anvil with an ease and grace that few farriers ever attain. He can bend a shoe and draw a clip in one heat, making it look effortless, while offering wisdom and wisecracks for good measure.

Not a hammer rap was wasted when Daniels flew in from his Mullica Hill, N.J., home recently to teach at a clinic sponsored by Cooper Hand Tools/Diamond at Centaur Forge in Burlington, Wis. Daniels was introduced by no less than Danny Ward of Martinsville, Va., who is himself a Hall Of Famer who can draw a crowd wherever two or more farriers gather. Ward called Daniels an inspiration, a mentor and “my hero for a lot of years.”

American Farriers Journal collected some of Daniels’ tidbits to share with readers. Here are a few:

In Memory Of Bruce Daniels: Articles From The AFJ Archives

Forging Tips From The Heartland

26 Tips from the 2020 Summit Roundtables