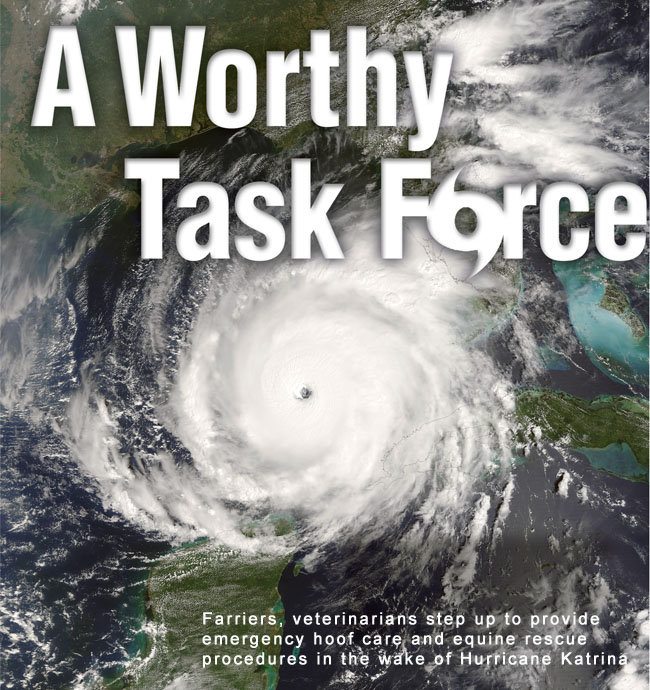 By Mike Podoll posted on December 1, 2005 | Posted in Shoeing

Farriers, veterinarians step up to provide emergency hoof care and equine rescue procedures in the wake of Hurricane Katrina

HURRICANE RITA. Made landfall in Texas and Louisiana on September 24, 2005, as a Category 3 hurricane with wind speeds of 120 mph and did damage totaling $8 billion dollars and was responsible for 119 fatalities (6 direct, 113 indirect).

In the aftermath of Hurricanes Katrina and Rita, which devastated the United States’ Gulf Region, one of the less publicized stories involving animal rescue and voluntary aid revolved around an incredible joint effort of a number of farriers, veterinarians and veterinary students in Louisiana.

Over a 6-week period, more than 400 horses were rescued, given medical attention and provided hoof care, thanks to the volunteer work done by shoers from around the country, veterinarians from Louisiana State University in Baton Rouge, La., farriers belonging to a specially formed American Farrier’s Association task force and LSU veterinary students. Together, these individuals provided much-needed foot and veterinary care to the horses affected by the country’s worst national disaster.

“I’ve lived in Louisiana my entire life and have never seen anything as bad as when Hurricane Katrina struck,” says Dick Fanguy, a 35-year veteran farrier from Chauvin, La., (located about 120 miles from Baton Rouge). “I’ve been through every hurricane and tropical storm to hit Louisiana since 1945 and I never saw anything of the magnitude of this storm.

“You can’t even fathom the destruction in the region.”

Amid the chaos and confusion in the days following the storm, was the problem of what to do with the overflow of wandering…

Efforts To End Soring Travel A Long And Winding Road