By Janice LeCocq, James Lee, and James LaClaire posted on May 1, 2011 | Posted in Therapeutic Shoeing

Although at first it seemed like a simple case, it soon become extremely complicated

Man, a 13-year-old American Paint gelding, suffered a severe barbed wire injury in May 2010. Immediately after the injury, the owners trailered the horse to their local veterinarian who cleaned the wound and prescribed antibiotics.

When the horse failed to improve over the next few weeks, the veterinarian extended the course of antibiotics. After 3 months with little improvement, the owners decided to seek another opinion, and the horse arrived at the Lee Veterinary Clinic in Atmore, Ala., on Aug. 14, 2010.

The horse was presented with severe lameness in the right front foot. Physical examination revealed significant infection and tissue necrosis through the hoof wall and sensitive laminae, including the medial collateral cartilage and the medial wing of the coffin bone (Figure 1).

Radiographs revealed three barbs were imbedded deep in the medial hoof wall, extending from the coronary band to the sole (Figure 2).

Dr. James H. Lee and Certified Journeyman Farrier Jim LaClaire agreed the first step was to debride the foot to remove the imbedded barbs and to remove all dead and infected soft tissue and bone. 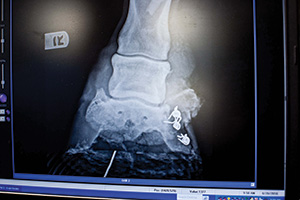 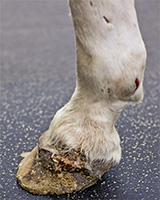 Once the foot was…