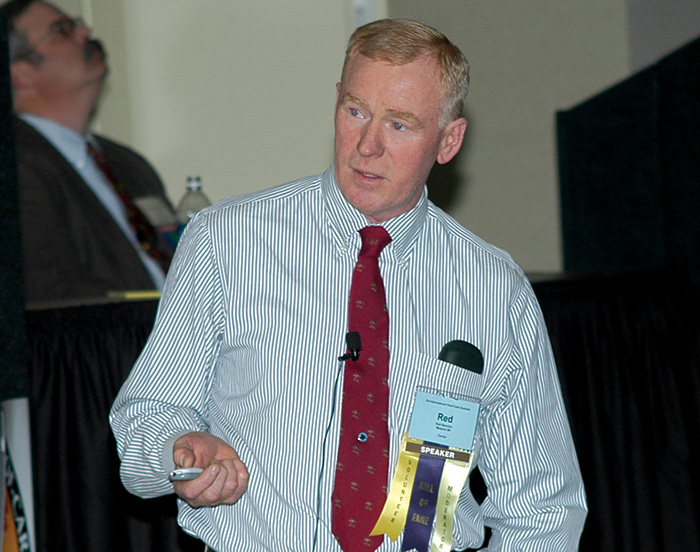 By Pat Tearney posted on September 1, 2006 | Posted in Therapeutic Shoeing

EASY QUARTER CRACK REPAIR. Hall Of Fame farrier Red Renchin explains a process he jokes could be called “Hoof-Crack Repair For Dummies,” during the International Hoof-Care Summit in Cincinnati, Ohio, earlier this year.

Red Renchin, the International Horseshoeing Hall Of Fame member from Mequon, Wis., has a well-earned reputation for innovation. He demonstrated it again during the International Hoof-Care Summit, by sharing a case study he said should be subtitled, “Hoof-Crack Repair For Dummies.”

The repair, which Renchin says he’s been using successfully for 3 years, involves some materials not typically found on a farrier’s truck.

“I buy a lot of my non-farrier supplies from an industrial supplier,” Renchin explains. “I was looking for an alternative to aluminum for my hospital plates and I came across this virtually unbreakable plastic.”

Wanted: Something Tough And Pliable

Renchin says he had found that sometimes aluminum hospital plates would dent. He wanted a material that would be easier for him to use than aluminum, but one that was at least as tough.

The material he came across is Hyzod polycarbonate plastic. While he was originally looking for a material to use in making hospital plates, he’s also developed a way of using it with Equilox in hoof-crack repairs.

The plastic comes in 1/4-inch-thick, 24-by-48-inch sheets. He cuts these sheets into 6-inch squares, which he keeps in his truck.

SHOE CHOICE. Red Renchin applied a heart bar-egg bar shoe to the hoof (left). He added a rim pad with a section cut out to…

Shoeing With an Eye on the Winner's Circle