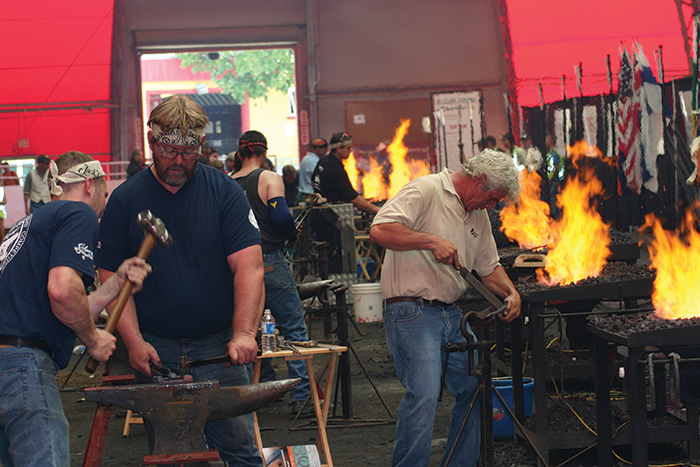 By Susan Kayne posted on September 1, 2006 | Posted in Forging

THE BEST AT WORK. The 56 participants at the World Championship Blacksmiths’ Competition in Calgary put their skills to use over 4 days of competition.

Veteran Billy Crothers earned his fifth world title, winning the 27th annual World Championship Blacksmiths’ Competition at the Calgary Stampede in Alberta, Canada. The Wales farrier topped the field of 56 blacksmiths from 13 countries. The competitors traveled from as far away as Australia and the United Arab Emirates with the hope of taking home the world title and a portion of more than $35,000 in prize money.

Last year’s victory by James Blurton of Wales had sent his fellow countrymen and blacksmiths from around the globe back to their anvils to practice for yet another year. Among them, Crothers of Wales and the 2005 runner-up, the young Englishman Steven Beane. Blurton did not compete at Calgary this year.

Beane bounced back to claim the European Championship in Finland in May. The big win seemed to help Beane this year at Calgary as he competed with a focus and determination well beyond his 27 years.

The first day of competition brought Beane two top honors, a win in Class 30, which required contestants to forge a calk and feather shoe, and Class 50, which required the forging of an unusually hard-to-handle fishtail bar shoe.

Crothers, with nearly 20 years on Beane, showed the cool resolve of a seasoned competitor. It was no surprise to those in the blacksmithing community that Crothers easily won the first…