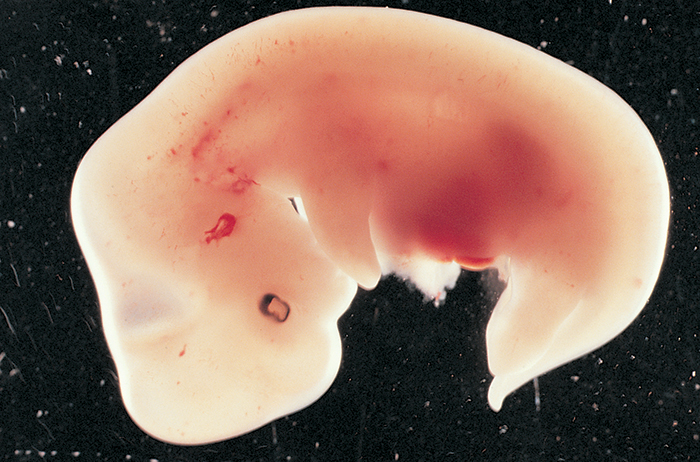 Hooves Budding in the Womb

By David Ellis posted on September 1, 2006 | Posted in Anatomy

Development of the equine leg and foot

In routine stud veterinary practice, the mare’s pregnancy is confirmed by ultrasound examinations at varying times from 13 days after ovulation. In checks at 40 days some parts of the skeleton are discernible and, by 65 days, the shape and structure of the limbs are clear.

These observations confirm that the limbs develop very early in equine pregnancies. They can be observed as small buds or outgrowths on the embryo by about 30 days of gestation, the forelimbs appearing a few days before the hind limbs (Figure 1). Precursor cells within the buds multiply and change to form the components of the limb, which include the cartilage model, on which ossification builds the bones of the limb, the muscles, their tendons and the ligaments. The shapes of the limbs, joints and hooves are readily apparent in the embryo as early as 50 days even though they contain no bone. The period between 30 and 50 days of pregnancy is critical for correct development of the embryo.

Formation Of Bones And Joints

The long bones of the limbs are derived from tubes of cartilage formed by the precursor connective tissue cells. The outer cuff is called the periosteum (Figure 2) and this layer of cells produces bone on its inner surface, which gives it shape and rigidity. Repeated absorption of this inner layer of bone coupled with further laying down…