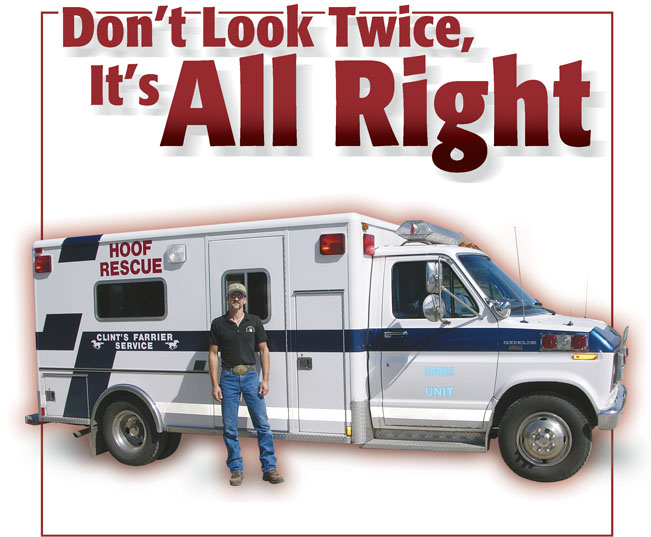 Don't Look Twice, It's All Right

It looks like an ambulance, but this shoeing rig is now equipped to care for hooves, not people

FARRIER TO THE RESCUE. This one-time ambulance was the third converted to a shoeing rig by farrier Clint Laybourn of Kingston, Wis.

Excuse the older folks who still pull to the side of the road when Clint Laybourn’s shoeing rig approaches from behind. Even without its emergency lights flashing, the truck still looks very much like the ambulance it once was. Even the police were fooled when the rig first appeared on the roads in and around Kingston, Wis., where Laybourn shoes, but they now recognize the vehicle and offer a wave whenever he drives by.

It helps that Laybourn turned to a professional sign-maker to produce large decals to promote his business on the truck. “Clint’s Farrier Service” is posted on both sides, as is “Hoof Rescue.” Across the two rear doors, “Horseshoer” is posted big and bold, and “Hoof’n It” is decaled across a bug guard above the front grill.

The 1988 Ford Econoline van with the original Horton brand box for a work area is Laybourn’s third ambulance-turned-shoeing rig. He jumped at the chance to pay $5,000 for the vehicle with 76,000 miles on it. A year and 45,000 miles later, he’s still thrilled about the buy.

The diesel-powered rig, which gets about 14 miles per gallon, was well maintained and showed few signs of wear when he bought it. Laybourn says there was a little rust around the bottom of the cab, but he also notes that maintenance records that came with his…

Don't Depend on Luck When Choosing a Specialty Hammer

Choosing the Right Hardware for Your Toolbox