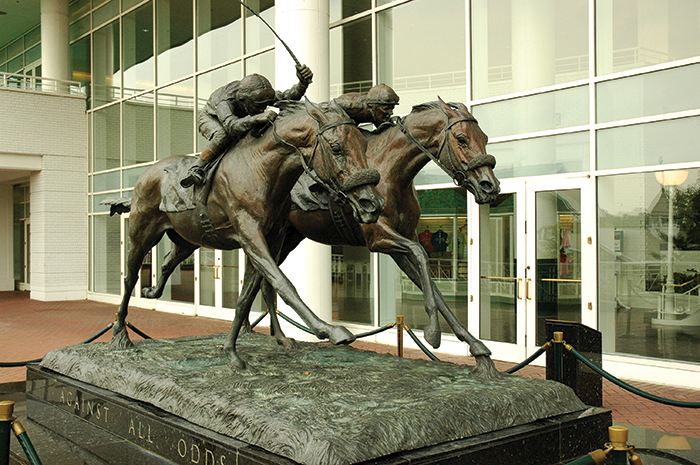 Arlington Park's: ""Against All Odds"" Captures One of Horse Racing's Great Moments

By Pat Tearney posted on November 1, 2006 | Posted in Disciplines & Breeds

If you’ve been to Arlington Park near Chicago sometime since 1989, perhaps you’ve already recognized the subject of the cover photo of this year’s Farrier Supplies And Services directory.

The photo is a detail from “Against All Odds,” the bronze statue that captures the legendary photo finish of the inaugural Arlington Million stakes in 1981, when John Henry charged down the stretch, comping from way back to catch The Bart at the wire.

American Farriers Journal editors were struck by the attention to detail paid by sculptor Edwin Bogucki, right down to the horseshoes. Editor/Publisher Frank Lessiter took the cover picture that shows a hind foot of John Henry as he drives for the finish line on shoes complete with a toe grab and an outside block.

Joe Trhlik of Rio Verde, Ariz., a longtime track shoer at Arlington, says John Henry was shod for the race by Glen Carpenter. He also notes another odd fact.

“Today, those shoes would be illegal on the grass at Arlington,” he says. “You would have to grind off the toe grabs.”

Trhlik says the shoe configurations were fairly common for horses that were base-narrow behind — which John Henry was.

“Without those shoes, John Henry wouldn’t have had the kind of career he did,” says Trhlik. John Henry was twice named Horse of the Year, and was the first horse ever to earn $6 million.

Premium content is for our Digital-only and Premium subscribers. A Print-only subscription doesn't qualify. Please purchase/upgrade a subscription with the Digital product to get access to all American Farriers Journal content and archives online.
KEYWORDS Against All Odds Arlington Park ceremonies Chicago Glen Carpenter Joe Trhlik John Henry pat tearney

Horses Add To The Solemnity Of Arlington National Cemetery

Knowledge Of Anatomy: One Of The Farrier’s Best Tools