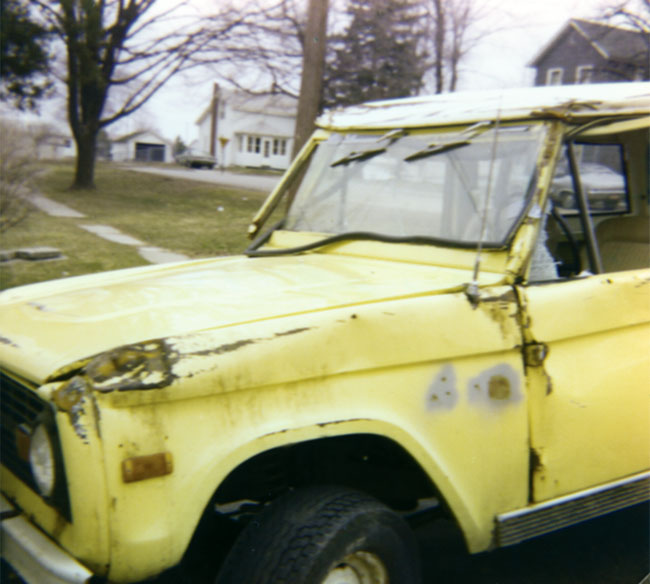 Duct Tape and the Bronco

A shiny, new shoeing rig might make for pride and joy, but memories say an old beater can be much more than it’s cracked up to be

BROKEN IN, NOT DOWN. Thomas Breningstall’s Bronco shoeing rig had a certain charm that earned him extra tips from sympathetic shoeing clients.

Back in 1976, when I decided I didn’t want to work for a living any longer, I decided to become a horseshoer and enrolled at Bob Reaume’s Wolverine Farriers School in Howell, Mich. I was one of an ever-growing number of people who took advantage of the renewed interest in horses, which skyrocketed in the 1970s.

I started shoeing out of a Chevy Vega hatchback. Actually, it was the family car at the time. My first real shoeing rig was a Ford Bronco. I paid a friend $200 for it after he rolled it over. (Thankfully, it had a rollover bar.) It needed reshaping to make it roadworthy again, but I was new to the farrier business and had lots of spare time. So, in the time between straightening bent horseshoe nails, I worked on that old Bronco.

I removed the top, the doors, the hood and the front fender. I used little hammers and big ones, a few 2-by-4s, jacks, clamps and whatever I thought might work to reshape and repair the parts of the Bronco that I had scattered all over the backyard.

After much hammering, pushing, pulling, bending and sweating, I got most of the dents out. Then I tried to put all the pieces back together. Easier said then done.

Most of the stuff didn’t fit anymore. The top was twisted, the doors were…

The Ultimate Shoeing Rig Is Real - And Waiting For You

A Rig for the Ages