By Tom Curl and Leah Clarke posted on May 1, 2011 | Posted in Therapeutic Shoeing

A 4-year-old was claimed out of a race in south Florida in the early part of the 2010 season. Even though the horse had obvious foot concerns, the new trainer gambled that the horse could quickly be returned to racetrack training.

The damaged foot had serious hoof-wall issues, probably due to white line disease. While no cultures were taken, the detached wall had to be removed before rebuilding of the wall could take place.

Several concotions of home-mixed drying paints were used to harden the laminae, although commercial products such as Thrush Buster can also be used. These paints were applied by grooms 10 times a day to help the hoof dry out after the trimming and shoeing was done.

This technique can only be done if there is a groom who will provide the needed attention to a severely damaged foot like the one shown here. 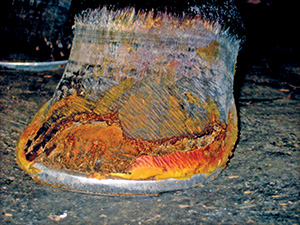 Figure 1. When the new farriers looked at the horse, this foot had a glue-on shoe and an assistant trainer had already begun to paint the exposed areas. Due to the large area involved, the glue-on shoe had been left in place. 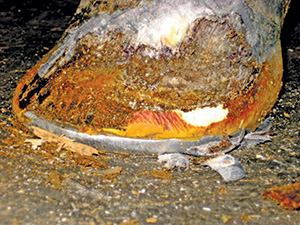 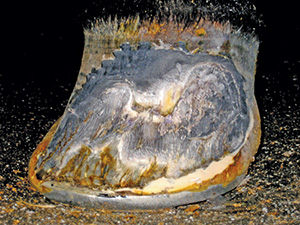 Figure 3. The wall and laminae removal was done with a 1/4-inch burr. 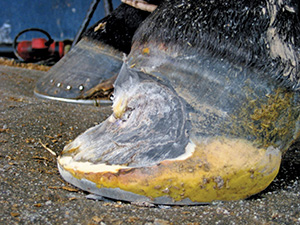 Figure 4. This lateral view suggests a possible rotation of the coffin bone.