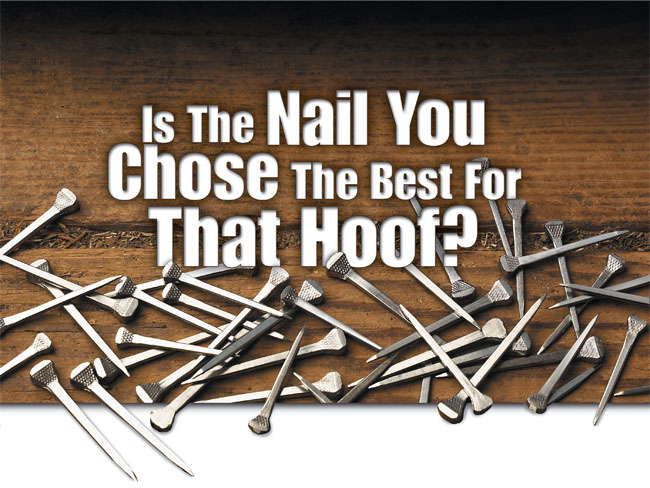 Is the Nail You Chose the Best for That Hoof?

By Ron Perszewski posted on January 1, 2006 | Posted in Education, Equipment

Sparing the hoof while keeping the shoe on could mean taking another look at a growing choice of horseshoe nails to fit the job at hand.

It still ranks as one of the Golden Rules of horseshoeing: Thou Shall Use The Smallest Nails Possible To Keep The Shoe On Until The Next Appointment.

And farrier schools continue to stress the rule’s importance as one of the foundations of proper shoeing.

“We go over nails every day while we’re shoeing horses, and we use the smallest and fewest nails we can get by with,” says Mike Wildenstein, instructor for the farrier program at Cornell University in Ithaca, N.Y. “I have nail charts on the walls, and I have comparison guides that go with different types of keg shoes.”

Likewise, Tom McNew, owner of Lookout Mountain School of Horseshoeing in Gadsden, Ala., tells his pupils that a bigger nail will crack or split the hoof easier. “We emphasize that to the students, and we also tell them not to use more nails than they really have to.

Old habits might account for much of the ongoing use of oversized nails by veteran farriers. For a long time, they have been reaching for the same tray in their shoeing box.

The Ultimate Shoeing Rig Is Real - And Waiting For You

What Are You Putting On That Hoof Wall?

With Tablet Computers, Home Is Where The Horse Is