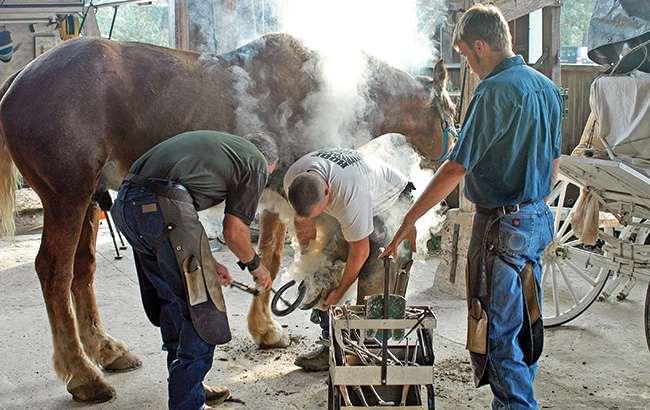 Good work habits, being on time and a willingness to learn are just some of the traits experienced farriers look for in apprentices

Farrier Jeff Pauley, left, hot fits a shoe on a carriage horse with apprentice Aaron Bean, as Nathan Best, another apprentice, stands by. Pauley, of Burnsville, N.C., realizes apprentices will move on. When this picture was taken, Bean had been shoeing with him for a couple of years, while Best was newer to the operation. As Bean began building his own book, Best would gain additional hours and already be familiar with the operation.

The art of shoeing a horse used to be a craft that apprentices learned from master farriers and journeymen, picking up knowledge without ever picking up a book. Times and the industry have changed, but the role of the apprentice is still part of the modern horseshoeing business.

With this two-part series we’ll look at both sides of the equation, from the apprentice’s view as well as that of the business owner. In part one, we present opinions from 10 top farriers on the pros and cons of having apprentices.

The motivation for taking on an apprentice (sometimes incorrectly referred to as an intern) varies from person to person and business to business. For some, it’s a way to lessen their workload or help with busy periods. For others, it increases the workload and time commitment due to the training and oversight involved, but they view it as a way to give back to the industry. Ultimately, the decision must be focused on whether or not it helps the business.