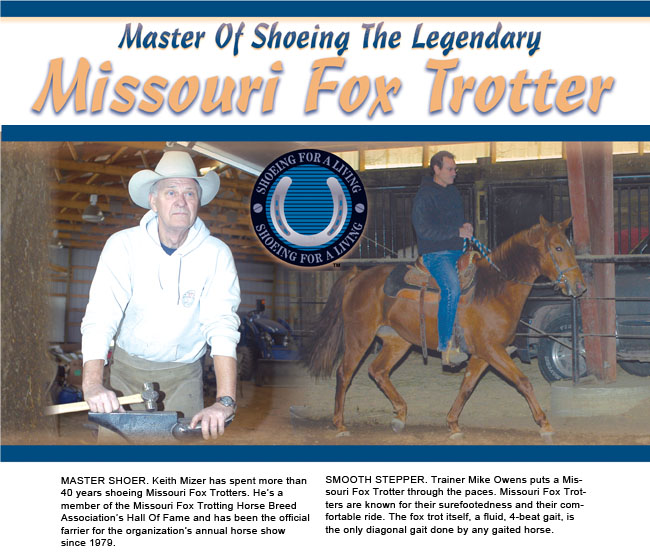 The autumn air is crisp as Keith Mizer leaves the Shoney’s restaurant in his home town of Lebanon, Mo. He fires up his truck and gets ready to do what he’s done just about every day for more than 40 years — go out and shoe horses.

8:40 a.m. But not just any horses. Mizer is a specialist and has spent the vast majority of his time during those years working on Missouri Fox Trotters.

“Probably two-thirds of the horses I see are Fox Trotters,” the 63-year-old Mizer explains. “I’ve got a lot of older clients, trainers and owners and I’ve been shoeing for them for a lot of years. I do shoe some barrel racers and some reining horses, but Fox Trotters are the real backbone of my business.”

Even when he first started shoeing, he already had his eye on the breed for which his home state is known. Mizer lost his mother when he was 16 and his father just 7 months later.

“I had to make up my mind when I was pretty young,” he says. “I decided this was what I wanted to do.”

Having made his decision, Mizer went looking for a mentor and found him in the person of a farrier who was widely regarded as one of the top shoers of the breed anywhere.

“I started working with Lloyd Bell when I first started shoeing,” Mizer recalls. “Fox Trotters were all he ever shod, all he really worked on. I rode with…