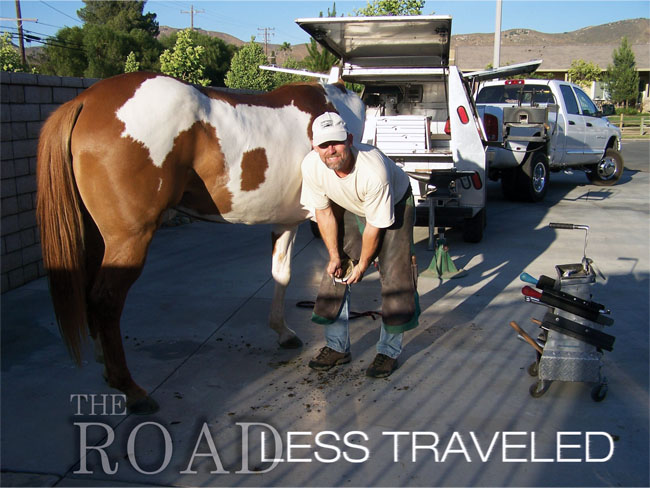 By Jim Goede posted on December 1, 2006 | Posted in Business Practices

JOB SATISFACTION. Jim Goede, who shoes horses in Southern California, looks up from a shoeing job. Goede has been shoeing for 5 years. He left a high-tech career at the age of 49 and says he has found much more job satisfaction as a farrier.

The endless hours on international flights in coach and getting laid off three times in 6 years was what finally did it. Thirty years in high-tech and the passion was all but gone. After the last layoff (a result of post-9/11 cost reductions at an Israeli-based optical components start-up company), I had had it. Stick a fork in me, I was done.

During the last year in high-tech, I was working out of my home just outside of the San Francisco Bay area where we had a couple of acres and a couple of horses. I started having longer and longer conversations with our farrier, who is a good shoer and a genuinely good person.

I was curious about how one becomes a farrier as well as how he liked being one. He told me about going to farrier school and what his days were like. My interest was peaked. I had been contemplating making some kind of a career change for some time, and this was starting to look like a good possibility.

After being laid off again, I decided to pull the trigger. We sold our house, moved back to Southern California (where we were originally from) and I signed up to go…

Branding Your Farrier Practice for Success Down the Road