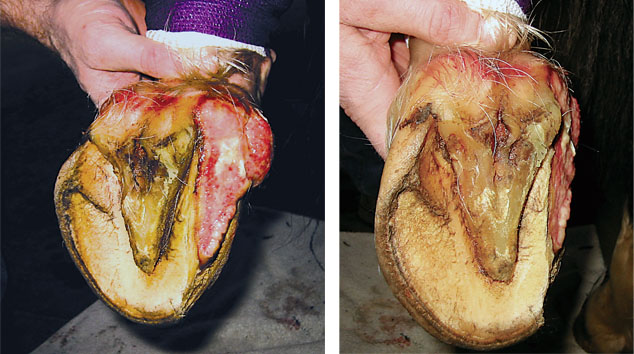 By Blake Brown posted on December 1, 2006 | Posted in Therapeutic Shoeing

BAD INJURY. After catching her foot in a fence wire, Snow Star lost almost a quarter of her foot. The coronet band and hoof wall were torn off, leaving the filly unable to stand correctly because of the missing area.

Snow Star was sedated and the wounds were cleaned, debrided and sutured where possible. There were no skin edges to close over the foot or the medial aspect of the cannon bone. A bandage was placed over the wounds of the leg and the foot and she was treated with intravenous antibiotics for a total of 3 days. Other medications were prescribed for infection and pain.

The owner informed us that she had recently purchased Snow Star for her 6-year-old daughter with the hope that her daughter and the filly would grow up together and have many happy days. Somehow, the filly had woven her left rear leg into a high tensile strength wire fence and proceeded to mutilate it and as well as her foot.

The prognosis was considered guarded for this injury because of the large area of the foot and leg that had been affected. It was noted that a skin graft might be required at a later date in order to provide complete healing of the leg.

The foot was another question all together. The owner was advised to bring Snow Star back for a recheck of the leg in a week. We would then decide if anything at all could be done for…

Hoof-Care Consultation as a Learning Opportunity

Solving the Mystery of Lost Shoes