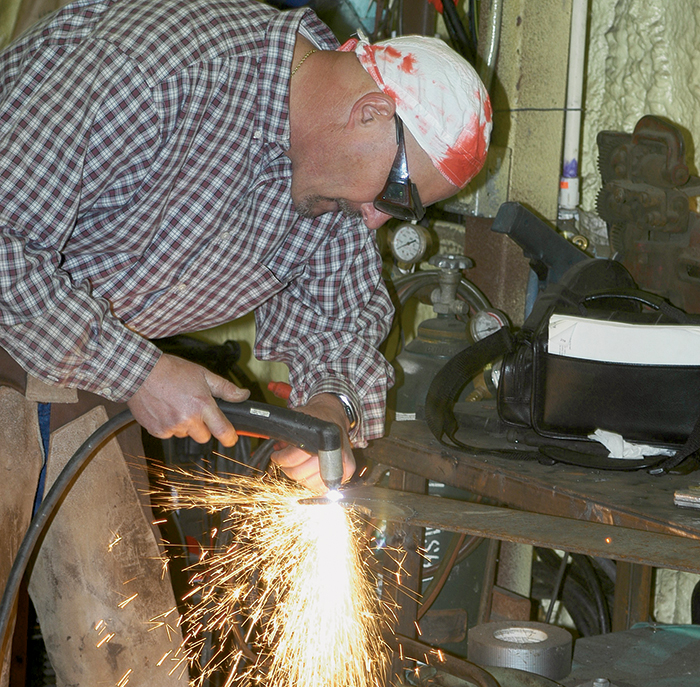 CARRYING THE TORCH.  John Muldoon uses a plasma cutting torch to cut an extension from a piece of sheet metal in the farrier shop at Oakridge Equine Hospital in Edmond, Okla.

When John Muldoon moved to the Oklahoma City area in 1984, he thought he was putting horseshoeing behind him.

Muldoon had moved to the Oklahoma capital from Colorado to take a job with an oil company, and figured he’d be too busy doing field work to have much time to spend shoeing horses. He was ready to move on after 8 years of shoeing, during which he worked primarily on gaited horses — mostly Saddlebreds, Arabians and Morgans – while also doing therapeutic shoeing at the Littleton Large Animal Clinic.

Of course, it may have been in his mind that he’d be able to pick up a little extra ready cash by shoeing a horse here or there. But for the most part, he was ready to hang up his shoeing apron.

“I hadn’t been here long when I had a call from Dr. Beckey Brewer from Chickasha. She asked if I shod horses,” he recalls. “I told her I used to. She said she got my name from Dr. Charlie Vail at the Littleton Large Animal Clinic. She had a horse she was doing a pre-purchase exam on and all it needed was a good shoeing job.”

So much for Muldoon’s shoeing “retirement.” He shod the horse — and the horse had a trainer. The…

Think the Situation Through Before You Pick a Therapeutic Shoe