By Heather Smith Thomas posted on March 1, 2007 | Posted in Education

This is a primer on hoof trimming, shoeing and overall care written primarily for horse owners, though it might serve as a starting point for someone interested in becoming a farrier. Novice shoers might also find it useful as a quick reference work.

The author, Heather Smith Thomas, started shoeing at age 14 on the family ranch under the watchful eyes of her father. Later, she was tutored by a local horse breeder and farrier.

Forty-seven years later, she’s still at it, and since 1966 she’s been caring for hooves on the Idaho ranch where she and her husband raise horses and cattle.

Along the way, she also took up endurance riding and became a prolific writer in the equine world, producing 18 books and thousands of articles for horse and livestock publications. She’s been a frequent contributor to American Farriers Journal.

Starting At Square One 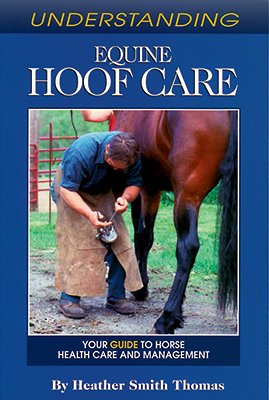 By the final two chapters, Smith Thomas leads readers through “Corrective and Therapeutic Shoeing” and “Pinpointing and Diagnosing Lameness in the Foot.”

Through the chapters on the cleaning and trimming of hooves, Understanding Equine Hoof Care can be used as a how-to book of instructions for horse owners wanting to tackle the job themselves.

It can also be used that way…

How To Get Owners To Join The Hoof-Care Team

Teaching Your Horse To Stand For The Farrier