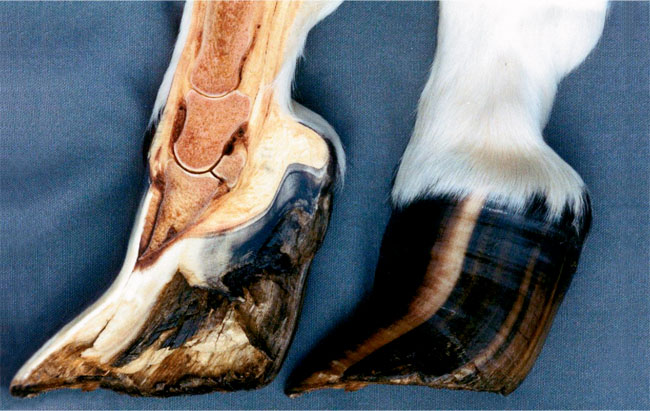 Dealing with a 'Stump Foot'

Club foot is a human condition that is not comparable to the condition in a horse, maintains this veteran hoof researcher

STUMP FOOT. This is a shortening of the deep flexor tendon. The tendon is not contracted because tendons do not and cannot contract, maintains Jim Rooney.

There’s an abundance, if yet not very helpful, literature on the Web and elsewhere on so-called “club foot” in horses. I maintain that it is so-called even though the condition in the horse is quite different than a dubbed club foot in humans. I prefer the term stump foot after the German word: stelzfuss.

I’m considering only that condition which occurs primarily in the right front foot, involves shortening of the deep flexor tendon with an increased hoof angle (high heels), and a tendency for the animal to “stand back” with the affected leg.

My earlier work and analysis of this condition can be found on the Web site listed at the end of this article. This paper elaborates on that earlier work, and the conclusions presented in the present paper may be considered with the findings of that earlier work.

The first and most significant contribution to understanding this condition was that of Owen (1976). He observed that stump foot could appear in foals kept in box stalls during…

Dealing With A Non-Developed Limb

Plastic W a Useful Tool for Dealing with P3 Displacement