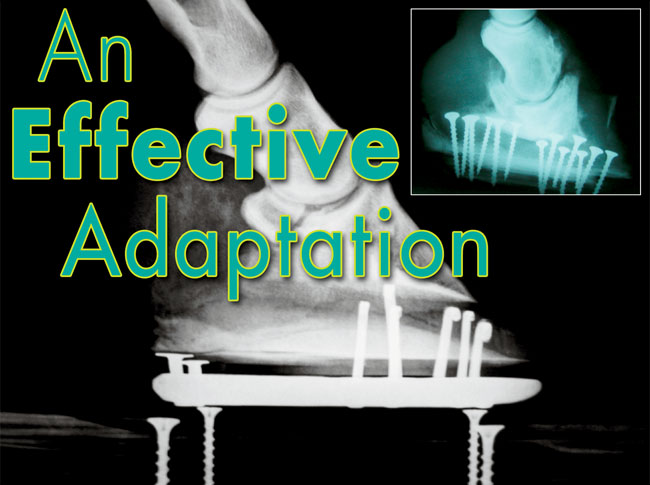 By Micheal L Steward posted on May 1, 2007 | Posted in Lamenesses

Sometimes the principles and techniques that are used to treat one hoof-care problem can be effective with others. In this case, the Steward Clog system that was developed for the treatment of laminitic horses helped return a horse with a malformed navicular bone to soundness.

An 8-year-old Quarter Horse gelding was presented with bilateral front limb lameness. The horse had been diagnosed at Oklahoma State University with bilateral triparte navicular bones of the front feet.

The owners reported that they had bought the horse as a 4 year old and that he was lame at the time of purchase. The horse was rested for 6 months and returned sound to pasture. However, upon being ridden after the turnout, the horse again exhibited lameness. Depending on the amount of riding, the severity of lameness varied.

The lameness became more severe over the next 2 years and a veterinarian was employed to try therapeutic shoeing. Wedge-heel, rolled-toe navicular shoes were applied and the condition improved initially, but after a short period, the lameness returned and continued to grow worse over the next year. The horse was spending about 90 percent of the time lying down and exhibited Grade 3 to 4 lameness over the next year.

It was at this time that radiographs taken at OSU revealed the triparte navicular condition and a grave prognosis was given. The horse was referred to our clinic to employ the atraumatic-rocking horseshoe (Steward Clog) in an attempt to help return the horse to…

Micheal Steward, DVM, is an International Equine Veterinarian Hall Of Fame member and is based in Shawnee, Okla.

Adding A Farrier Day To An Equine Veterinary Practice

Low Heels in the Hind Feet - An Often Overlooked Problem