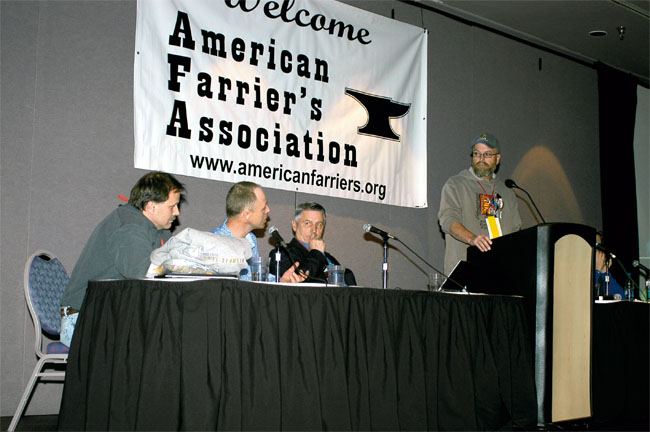 With the Sandia Mountains looming overhead, members of the American Farrier’s Association gathered along the banks of the Rio Grande River in Albuquerque, N.M., for their annual convention from Feb. 27 to March 3.

The organization’s 36th annual convention was hosted by the New Mexico Professional Horseshoer’s Association. The Albuquerque Hilton was the host hotel and events took place in the nearby Albuquerque Convention Center.

The AFA reported a record turnout and called the event it’s “best Albuquerque convention” ever in its “No Foot, No Horse” newsletter. The AFA has held four previous conventions in Albuquerque, in 1981, 1987, 1993 and 1997.

Among the educational highlights of the convention was a well-attended panel presentation that brought together six of the convention’s top speakers all at the same place and the same time. Attendees could submit written questions to the panel members.

“I really enjoyed it,” he said. “We had a box set out with each guy’s name on it that people could drop questions…

Houses for the Birds, but with Horseshoers in Mind

Any Time You're Driving Across The Country, Plan To Stop In Oklahoma