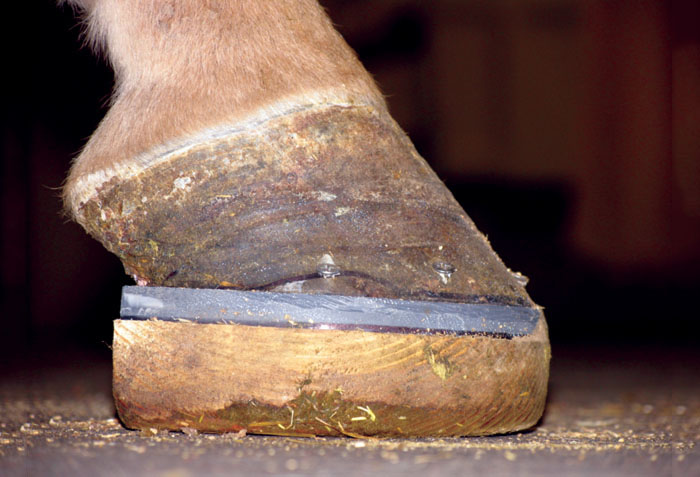 By Frank Lessiter posted on January 1, 2008 | Posted in Therapeutic Shoeing

A wooden support block is attached with 1.5-inch screws to provide more even support to the caudal aspect of the foot and frog.

The effective use of an elevated support limb shoe to protect a horse wearing a half-limb cast was discussed in December during the annual meeting of the American Association of Equine Practitioners in Orlando, Fla.

Ryan Carpenter and a team of fellow veterinarians at Colorado State University have found that properly applying a half-limb cast to a standing horse is an effective tool to treat numerous orthopedic and soft tissue injuries.

These casts have proven valuable in treating collateral ligaments of the metacarpo-metatarsophalangeal and proximal and interphalangeal joints in addition to dealing with pastern and metacarpal/metatarsal bone fractures. Other uses include dealing with injuries to superficial and deep digital flexor tendons and lacerations or wounds that have difficulty healing because of post-treatment movement by the horse.

Carpenter says the advantage of a cast over a traditional bandage is enhanced immobilization, increased durability and less costs for the client than making multiple bandage changes.

To reduce development of cast sores, Carpenter finds it is essential to maintain the proper angulation of the hoof-pastern axis along with the fetlock joint. While it is possible for an assistant to hold the limb during the entire procedure, proper hoof angulation can be achieved more easily by having the horse stand on a wooden block.

“After the application of a half-limb or full-limb cast, the patient is often unbalanced and…

When It Comes To Balance, Start With The Coffin Joint